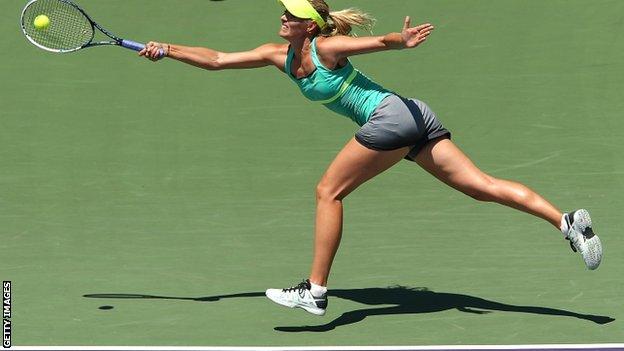 Maria Sharapova reached the final of the Sony Open with a 6-2 6-1 win over Serbia's Jelena Jankovic in Miami.

The Russian, 25, ranked second in the world, has never won the tournament despite reaching the final four times.

"It would mean so much. I absolutely love this city. It is the first city I landed in when I came to the United States as a little girl," she said.

It was a fine response after struggling to a 7-5 7-5 win over Italy's Sara Errani in the quarter-finals.

"I just really thought I needed to step it up from my last match and play a little better," said the four-time Grand Slam champion.

"I was really happy with the way I focused."

Sharapova's only two wins against Williams came in 2004, the first on the grass at Wimbledon and the next on hard court in Los Angeles

Williams has won her last 10 matches against Sharapova, the most recent of which was in the semi-finals of the Qatar Open in Doha last month, and boasts an 11-2 overall record against the second seed.

The 31-year-old American, five times a winner of the event, is bidding to become just the fourth woman in the modern era to capture the same event six times, following Chris Evert, Steffi Graf and Martina Navratilova.

Williams fired 12 aces and won 83% of her first serves in the 65-minute match against fourth seed Radwanska.

"Today my game wasn't great but I had to keep trying," she said. "I am excited because I am in the final.

"My family and friends are here so I have to do well. I can't let my friends down."