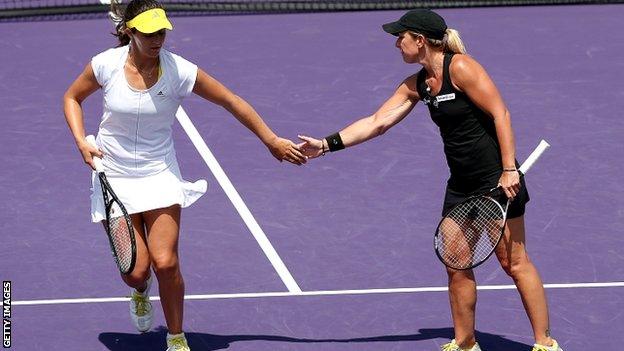 The 19-year-old Briton and 39-year-old American beat the Italian world number one pairing 6-1 6-2 in Miami.

They will face Russia's Nadia Petrova and Katarina Srebotnik of Slovenia in Sunday's final.

"I thought we played really well; straight from the start we were firing," Robson told BBC Radio 5 live.

"I was very aggressive from the baseline and Lisa was picking them off at the net. She helps me refocus because I start singing along to the music, and she says 'Come on, focus'.

"I didn't feel any nerves serving out the match. I just enjoyed myself and went for everything. I can just pick a place to hit it and go for it, and if it doesn't work out I go for the next one. In singles you have to think a bit more."

Errani and Vinci have won three of the last four major titles but quickly found themselves 4-0 down against the wild cards, and there was no let-up as Robson and Raymond powered to victory in just 57 minutes.

Raymond, who has won 79 doubles tournaments including six Grand Slam titles since turning professional in 1993, had planned to play with Sam Stosur in Miami.

The view from courtside

Robson and Raymond only got together at the last minute before the tournament began a week ago, but they combined perfectly to thrash the best doubles team in the world.

Errani and Vinci have won three of the last four Grand Slam tournaments, including the Australian Open in January, but they had no answer to the baseline power of Robson, who was the best player on the court.

"She pulled a muscle about two days before, and my agent suggested Laura," the American explained. "I always thought we would suit well together. She has huge groundstrokes and allows me to move well at the net.

"It's clicking. It's been an instant fit. Some partnerships don't fit well at all. This is nice, to play our first event and click like this."

Robson, who will be playing in her first WTA doubles final, is ranked 43 in singles and 248 in doubles, with the latter set to improve dramatically when updated on Monday.

And Raymond is in little doubt about the teenager's potential, adding: "Laura has so much game, she's so powerful with her serve and return. That team we played today, I haven't even come close to winning a set before against them, so it's great. I would love to play more with her.

"We'll talk about it but I really think it's a great partnership given our styles of play. It's good for me because she helps me have a laugh out there.

"I try not to think about our ages, but she could be my daughter and she has so much energy and excitement, and so much ahead of her.

"It's fun practising with her, fun playing with her. I've been saying all week that I liken her to a young Lindsay Davenport.

"The way the ball comes off her racquet, she's such a clean striker of the ball, and she has a phenomenal future ahead of her. The fact that she is a leftie as well. Keep an eye out for this girl."

Robson, who last week, is open to the idea of playing with Raymond in future.

"I'm loving Miami and now I can spend a couple more days here," said the Londoner. "Absolutely I'd love to play more with her. I don't think she's missed a volley all week. We're doing well, so why not?"

Their final opponents needed a third-set super tie-break before beating Russia's Svetlana Kuznetsova and Italy's Flavia Pennetta 6-3 3-6 10-6 to reach their fourth final in a row.