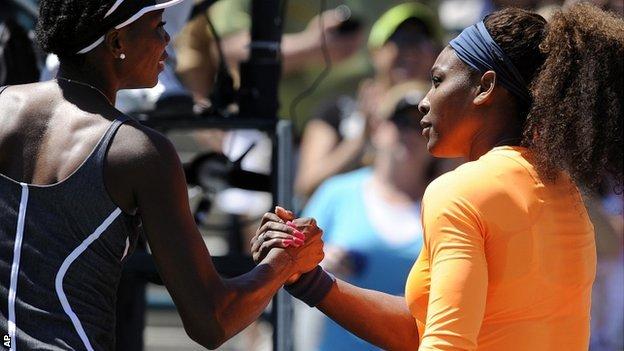 Serena Williams thrashed her sister Venus in the first meeting between the American siblings since 2009 at the Family Circle Cup in Charleston, USA.

The world number one and defending champion beat her elder sister, ranked 24th, 6-1 6-2 to reach the final.

Serena won six successive matches against Venus from 2002-3, culminating in the 2003 Wimbledon final

The Williams sisters had last met on tour when Serena beat Venus in the final of the season-ending WTA Championships in 2009.

Both players have since struggled with illness and injuries, but in the last year Serena has stormed back to the top of the game, while Venus has also fought her way back from outside the top 100.

Heavy rain in the South Carolina city earlier in the week left both women having to play twice on Friday, and Serena came out of the blocks much the sharper, a rasping cross-court forehand pass setting up an early break point that Venus handed over with a double fault.

The first set flew by in just 22 minutes and Serena quickly moved 2-0 up in the second, breaking once more as she sealed victory in just 54 minutes.

"It's really exciting," Serena said of playing her sister on tour again.

"Especially since we both had to play so much tennis yesterday, it's definitely hard on our bodies. We're doing great, and we knew at least one of us was going to be in the finals tomorrow."

She added: "I feel great on the clay, I love sliding and I really look forward to not only tomorrow's match but the rest of the clay-court season."

Williams will now meet Jankovic in the decider on Sunday and the Serbian is expecting a difficult encounter after coming through in three sets against Voegele.

"Obviously she is the number one in the world now. It has been a long time since we played on clay so it will be a tough match but I will give it my best," said Jankovic.