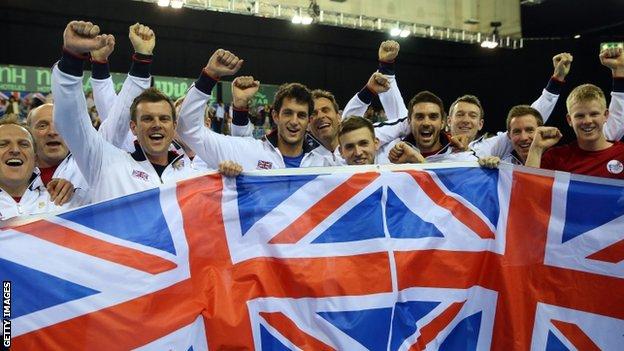 James Ward and Dan Evans stunned Russia as Great Britain clinched a historic 3-2 victory in the Davis Cup in Coventry.

"James Ward showed huge courage to complete such a high-class victory after losing so painfully on Friday night, in what he says has not been an easy week for him personally. And Dan Evans made a mockery of his ranking - he looked like he was born for the moment. Captain Leon Smith deserves a huge amount of credit for picking the British number six and for coaxing the best out of his underdogs. This was a fantastic team effort and with Andy Murray promising to make himself available in September, a return to the World Group may be on the cards."

It is the first time since 1930 that Britain have won from trailing 2-0.

Two-time winners Russia were relegated from the World Group last year for the first time in 20 years and, with British number one Andy Murray opting to miss the tie, went in as clear favourites at the Ricoh Arena.

Both Ward and Evans were beaten in five sets as Britain fell 2-0 behind on the opening day, but a win by doubles pairing Jonny Marray and Colin Fleming on Saturday revived the team's hopes.

Ward recovered from two sets to one down to win a five-set marathon against world number 67 Tursunov and send the tie into a decisive rubber.

The British player, who lost a marathon match to Donskoy on the opening day of the tie, put the win over Tursunov up alongside his first-round Wimbledon victory over Spain's Pablo Andujar last year as the best of his life.

"This has to be one of the sweetest victories of my career, after injuries last year and coming so close to winning on Friday, winning this in five is a big achievement for me," he said.

"It's got to up to there as one or two. Wimbledon's always special because it's the biggest tournament in the world. [Andujar] was a top-30 player as well so that was special but this is just as much.

"I was two sets to one down against a guy who's been 20 in the world. If anything, it's even more pleasing beating Tursunov. He's been a bit of a bogey man for me."

That set the stage for Evans, who was the hero of Britain's victory over Slovakia last year, to record an emphatic straight-sets win inside two hours.

Evans said: "I expected to have to do quite a lot more running than I did and it was quite surprising how the match went, I think for both of us. But obviously I was really happy with that and I played really well.

"On Friday I played well and I've been hitting the ball well all week so I knew I was there or thereabouts.

"I thought we were so unlucky on Friday to come away two five-set matches down. It was almost a bit of a joke. I think we deserved a bit of luck today."

The draw for the play-offs will take place on Wednesday and with world number two Murray already committed to playing in September, Britain will fancy their chances of returning to the elite World Group level for the first time since 2008.

GB Davis Cup team captain Leon Smith said: "On Friday we were unlucky not to have been 2-0 up. I always said I thought we could cause an upset.

"On the practice court on Sunday morning, there was no doubt in our minds we could do this. I'm so proud of the whole team.

"James's was a hell of an effort to come back, then Dan came in and he bossed that match. I think it's one of the best days I've seen in British tennis."

Evans was only in the team following a change of heart from Smith, who had initially chosen British number three Jamie Baker in his team.

The crucial moment came in the second set when the 22-year-old, having already broken Donskoy, saved two break points on his own serve before going on to clinch the set before completing the victory in the third.

Ward had earlier showed his resilience by beating Tursunov in a rubber that lasted three and a half hours.

After falling two sets to one down, The 26-year-old Londoner regained the initiative with an early break of serve in the fourth and then broke again in the fifth game of the decider before holding his nerve to complete the comeback.