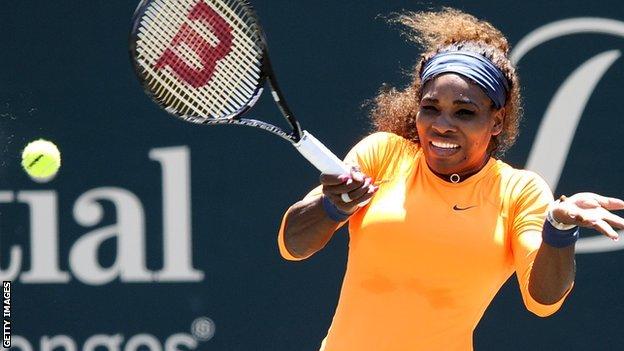 The 31-year-old got off to a shaky start as Serbia's Jankovic broke serve twice in the opening set.

Following a heated exchange between the pair at the start of the second, Williams won 12 of the next 14 games.

I am the most respectful player, other than Venus. I am so respectful to my colleagues

"Honestly, you have a problem," Williams shouted across the net at Jankovic at one point.

This was the second tournament win in as many weeks for Williams, following her victory in the Sony Open in Miami on 30 March.

Williams thrashed sister Venus in the last four on Saturday, while Jankovic needed three sets to beat unseeded Swiss Stefanie Voegele, but it was the Serb who began stronger in the final.

However, the pair argued at the start of the second set as Williams complained that Jankovic, 28, was serving before she was ready, even stopping her opponent mid-swing on one occasion.

"How long do I have to wait?" Jankovic asked the umpire.

"Until I'm ready," replied Williams, who won the next eight points.

Williams seemed less affected by the dispute as she cruised to the second set before taking her 49th singles title on her third championship point in the deciding set.

"I wasn't ready," Williams said of the dispute. "I am the most respectful player, other than Venus. I am so respectful to my colleagues."

Jankovic admitted the incident had affected her play, saying: "I gave her wins. I let her back in the match. That was my mistake."

The world number 18 added: "I got tired. It was my sixth match here and playing Serena is not easy - you have to run a lot of balls down and hit as hard as you can and give your maximum.

"She's so strong. She's the number one player in the world for a reason. She was the better one at the end."