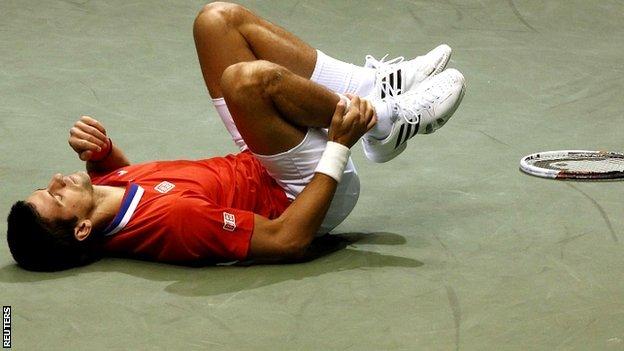 World number one Novak Djokovic is a doubt for next week's Monte Carlo Masters after damaging his ankle on Davis Cup duty on Sunday.

The Serb, 25, twisted his right ankle during his win over Sam Querrey of the United States in Boise, Idaho.

It added: "Depending on the recovery, a decision will be made on Nole's participation in Monte Carlo."

Djokovic posted a photo on twitter as he under went treatment, saying: "I'm doing the best I can with my team to recover fast for the upcoming tournaments."

He injured the ankle while hitting a forehand in the third game against Querrey, falling to the ground in pain, but with the help of anti-inflammatories he powered to a 7-5 6-7 (4-7) 6-1 6-0 win.

"I sincerely hope that I didn't make it worse and I'm going to have a few days off," Djokovic said afterwards. "I was able to play some good shots at the right time.

"If I wasn't playing for Serbia, if I didn't have my team-mates' support, I don't know if I would've played. The first half hour it was very painful."

Should Djokovic pull out of Monte Carlo, world number two Andy Murray would be the top seed when the clay-court Masters 1000 tournament begins on Monday.

Rafael Nadal will be defending the title extending his unbeaten run there to 42 matches when he beat Djokovic in the final.

Roger Federer, the world number three, has chosen to skip Monte Carlo and begin his clay campaign in Madrid in May.