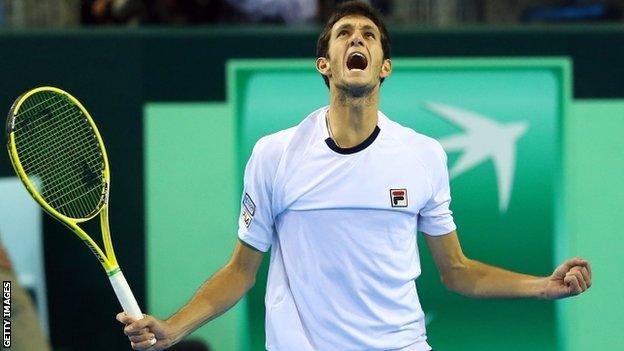 Both Ward's singles matches went to five sets with defeat by Evgeny Donskoy followed by a marathon 6-4 5-7 5-7 6-4 6-4 win over Dmitry Tursunov.

"By Monday afternoon I wasn't feeling too good so I went to my local A and E," the 26-year-old said.

"They put me on a drip and let me go at midnight. I'm feeling much better."

Ward added that he still hoped to take up his place in the Challenger Tour event in Sarasota, Florida, which begins on Saturday.

Ward's win over Tursunov, who is ranked 149 places above him, ranks among the biggest of his career.

The right-handed Londoner en route to the semi-final of the Aegon Championships at Queen's Club in June 2011.

He has climbed world ranking places since the start of this year, but at 217 in the world is 80 places short of his career-best standing.

Great Britain's win over Russia secured a play-off against one of the World Group first-round losers for a place in the top level of next year's competition.

Spain, Switzerland, Croatia and Germany are among the eight nations that could be drawn against Great Britain as Leon Smith's team attempt to secure a return to the World Group for the first time since 2008.