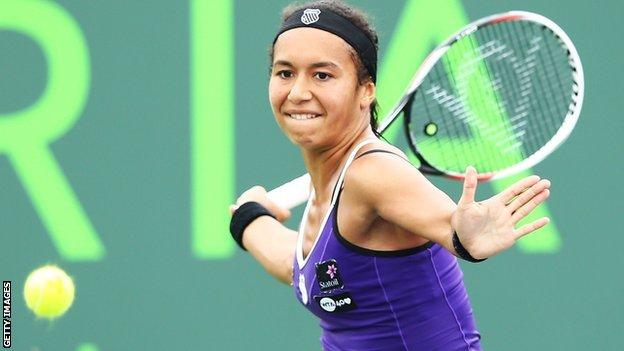 Heather Watson is hoping to return in time for the French Open in May as she recovers from glandular fever.

The 20-year-old revealed last week that she was at the "tail-end" of the fever, but will miss Great Britain's Fed Cup tie against Argentina on 20-21 April.

Watson's victory at the Japan Open in October was the first WTA singles title win by a Briton since Sara Gomer in Northern California in 1988 - four years before Watson was born.

"I can't put a specific date on when I'll return but I hope I'll be playing at the French Open."

The second major of the year begins on 26 May and ends on 8 June.

Watson had climbed to a career-high 39 in the world rankings on the back of third-round appearances at Wimbledon and the Australian Open.

The Guernsey native also became the first British woman for 24 years to win a WTA singles title with victory at the Japan Open in October.

But, after first-round exits at Miami and Indian Wells, Watson announced she felt "burnt out" and would take a break from the sport, only to reverse the decision a day later.

When she was eventually diagnosed with glandular fever, she said it was a "relief" to learn the cause of her problems.

Speaking at the launch of the Aegon Classic, which will be staged at Edgbaston Priory in Birmingham from 9-16 June, Watson said: "I'm optimistic that I'm nearly over the worst.

"I was playing with it for quite a while and really struggling, the fact that I now know why will help me recover quicker.

"Maybe it's just a sign that I needed a break. I know I'll come back stronger, fitter and more determined."

Watson has slipped back to 41 in the world rankings and been replaced as British number one by Laura Robson.

Robson is part of the GB Fed Cup team for the Argentina tie, when Judy Murray's side will attempt to secure a place in the World Group.

"I'm really happy for Laura, she deserves it," continued Watson. "We have a friendly rivalry that will hopefully spur us on for years to come.

"I would have absolutely loved to go to Argentina, I'm so disappointed.

"It's unfortunate I won't be there but I know the girls are still going to do well."