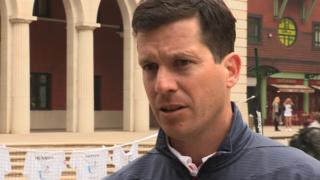 Former British number one Tim Henman says having only one man in the world's top 200 is "embarrassing" for Great Britain.

The GB Davis Cup team will have a "great opportunity" to return to the World Group when they face Croatia in a play-off in September after James Ward and Dan Evans, ranked 217 and 324 respectively, both won matches in a victory over Russia last week. World number two Andy Murray has said he will play against Croatia.

Henman says the improvement in the women's game, where Laura Robson and Heather Watson are both ranked inside the top 50, shows that things can turn around and that promising youngsters such as Kyle Edmund, Oliver Golding and Liam Broady can "fill the void".