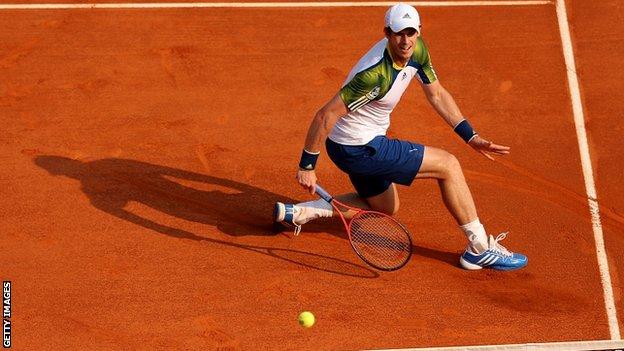 World number two Andy Murray got his clay-court season off to a strong start with victory over Edouard Roger-Vasselin at the Monte Carlo Masters.

Eight-time champion Rafael Nadal extended his incredible unbeaten run in Monte Carlo to 43 matches with a 6-1 6-2 win over Marinko Matosevic.

Djokovic only confirmed on Tuesday that he would play in the tournament after twisting his ankle earlier this month, and looked in trouble when he trailed 5-1 in the first set before recovering to win in three.

"I think that my ankle is in a good state as the days are passing by," said the Serb, a Monte Carlo resident. "Today was a big test, I had a great quality opponent.

"My clay movements are still not at the maximum. But I'm going to slowly get into it. Hopefully I can elevate the level of performance in the next match."

Murray had no such problems against Roger-Vasselin, sweeping past the 29-year-old in one hour and 13 minutes.

"I got to 4-0 early on which helped," said Murray. "I think he was a bit nervous, didn't move that well at the beginning and then he started to play better.

"He was getting a lot of balls back and I tried to attack as much as I could. It's a positive and good start."

The Frenchman had an advantage in terms of time on court after coming through qualifying before beating Robin Haase in round one, while Murray had a bye and was playing his first match on clay since last year's French Open.

There were no signs of rustiness, however, as the Scot raced into a 4-0 lead and recovered from dropping serve for the first time to earn his third break on the way to taking the set.

An early break put Murray in charge of the second and he withstood a break-back point - and a time violation while he took his time preparing for the crucial serve - to move 4-2 in front.

Another time warning prompted some angry words for Murray towards the umpire but he regained his composure sufficiently to serve out the victory.

Umpires have been instructed this season to be more vigilant around the 25 seconds allowed between points, and Murray said: "The only issue I have with it is, in the whole time over four months, I've yet to see the receiver given a time violation; it's always the server that's given it."

He added: "The first one I agreed with, I said nothing about it, the second one he was checking his strings."

Nadal will next face Philipp Kohlschreiber of Germany, while Djokovic takes on Juan Monaco, who beat Ernests Gulbis in three sets after the Latvian had at one stage been penalised a game for repeatedly smashing his racquet.

Roger Federer, the world number three, has chosen to skip Monte Carlo and begin his clay campaign in Madrid in May.