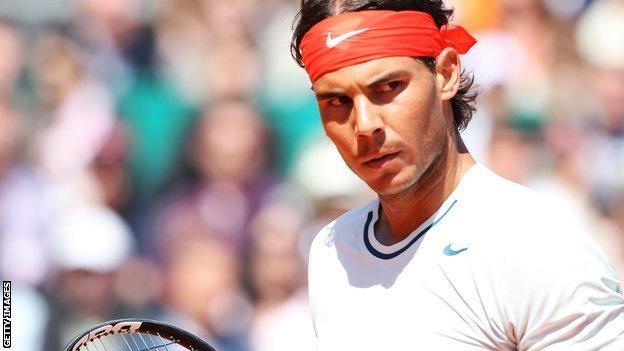 Rafael Nadal extended his winning run at the Barcelona Open to 35 matches, but compatriot and top seed David Ferrer suffered a shock defeat.

Second seed Nadal, bidding to win the tournament for the eighth successive year, began with a 6-4 6-2 victory against Argentina's Carlos Berlocq.

I don't want to talk about being a title favourite

Ferrer pulled out of the Monte Carlo Masters last week with a leg injury.

"It was the worst match that I've played in the last couple of years," said Ferrer, who was playing for the first time since losing to Andy Murray in the Indian Wells final.

"I lost the third set too fast. He was better today and more aggressive in the third. I just did not feel good on the court today."

Nadal was back in action three days after in Monte Carlo, and was keen to play down his winning run in Barcelona.

"I don't want to talk about being a title favourite," he said. "I'm just very happy to be playing well and into the third round. I'm not looking ahead."

Britons Colin Fleming and Jonny Marray lost 7-6 (7-5) 6-4 to Alexander Peya of Austria and Brazilian Bruno Soares in round two of the doubles.