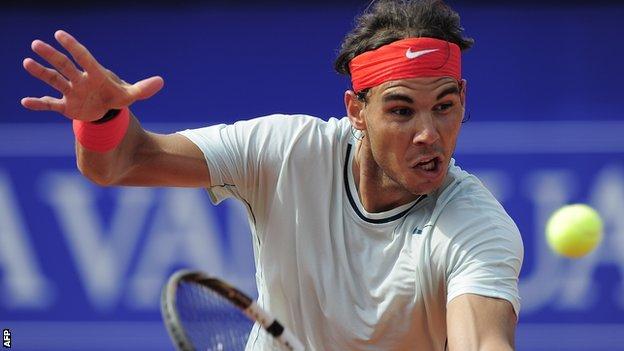 Rafael Nadal reached the semi-finals at the Barcelona Open after coming through two matches on Friday.

The world number five, who has won the tournament seven times, beat France's Benoit Paire 7-6 6-2 in a third-round match, which was delayed by heavy rain.

Nadal then returned to the court a few hours later to win 6-3 6-0 against fellow Spaniard Albert Ramos.

"The day went well. I was able to win both matches in two sets, so I am pleased," said the 26-year-old.

Nadal, who will face Milos Raonic of Canada in the last four, has won 37 straight matches at the Real Club de Tenis and is on course to make his sixth consecutive final this year after returning from a long injury layoff.

Two matches in a day tested the knee of the former world number one, who continues to recover from the injury that saw him miss nine months of action.

"I played much better than this morning," he said after beating Ramos.

"Making the semi-finals is great news and I am pleased to get through a difficult day like today."

After losing his eight-year unbeaten run at the Monte Carlo Masters with defeat by Novak Djokovic on 21 April, he is hoping to keep his Barcelona winning run intact.

He has won every Barcelona Open since 2005 apart from 2010, when he withdrew citing fatigue.

The other match will be between fourth seed Nicolas Almagro, of Spain, and Germany's Philipp Kohlschreiber.