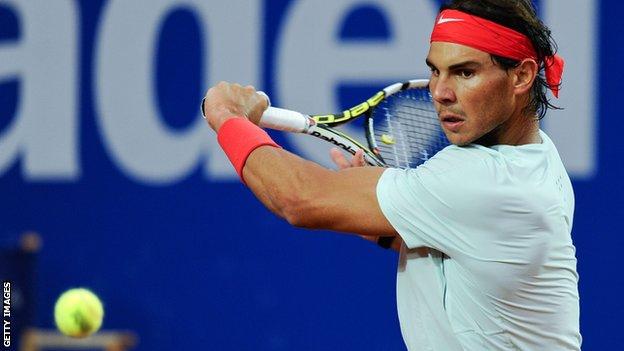 The Spaniard won 6-4 6-0 in front of his home crowd to reach Sunday's final without losing a set in the tournament.

Nadal has not lost in Barcelona since 2003 and is aiming for a 39th straight win at the event when he meets fellow Spaniard Nicolas Almagro in the final.

Six finals out of six since my injury return is fantastic. What could be better?

Nadal, 26, will be competing in his sixth straight final since returning from a seven-month absence with a knee injury.

"Whatever happens in the final it has been a great tournament for me," said the world number five.

"Six finals out of six since my injury return is fantastic. What could be better? I'm so happy to be in this final again."

After a four-hour rain-delayed start, Nadal dropped his opening service game against Raonic but quickly won back the break as he started to dominate.

The Canadian had no answer as Nadal clinched the opening set in 40 minutes before comfortably taking the second.

Now he faces his compatriot Almagro, who has lost all nine of his previous matches against Nadal.

Fourth seed Almagro, 27, did not face a break point against Kohlschreiber and broke his opponent twice in each set to reach his 20th ATP World Tour final in just 51 minutes.