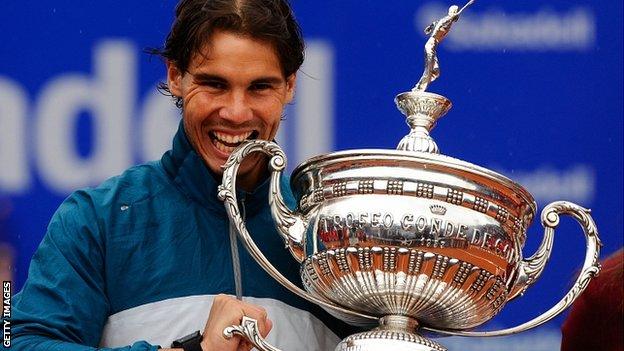 The Spanish left-hander has not lost at the venue since 2003 and a 6-4 6-3 victory was his 39th consecutive triumph in the tournament.

These months of work have been worth it

Nadal struggled while there was light rain early on and he found himself 3-0 down after conceding two breaks.

But the second seed eventually triumphed in an hour and 33 minutes.

Nadal would have been fearful of a second consecutive final defeat on clay early on,

However, the world number five soon found his rhythm, recovering to lead 4-3 before closing out the set with his first set point on the Almagro serve.

The outcome of the match was never in doubt after that, with Nadal producing two breaks of the Almagro serve in the second set to clinch victory.

It continued Nadal's excellent run of form since returning from a seven-month absence due to a knee injury.

The reigning French Open champion has now won four titles and been runner-up twice since his return after seven months out with a knee injury in February.

"With just these six tournament since I have returned, I have managed to assure my place in the top 10 one more year, which is positive. These months of work have been worth it.

"This win doesn't mean much (about the future), just that I am in good form since I have come back. The results are fantastic; I would never have imagined them and they are better than I had dreamed.

"I am back playing at a high level."

Fernando Verdasco is the only other player to have won in Barcelona since 2004, taking the title in 2010 when Nadal was absent due to fatigue.