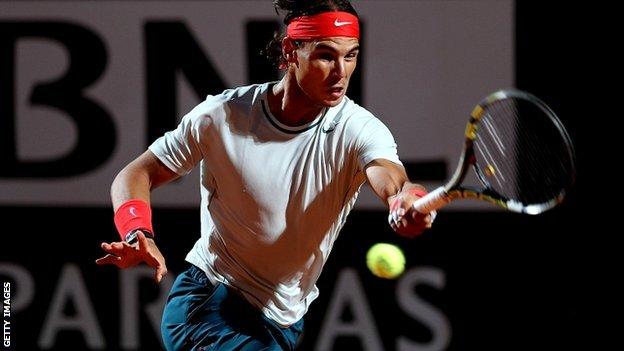 Nadal cruised past local hope Fabio Fognini 6-1 6-3 in just 61 minutes, on a day that saw Andy Murray and Stan Wawrinka pull out with injuries.

Murray admitted a lower-back problem means while Wawrinka has a thigh injury.

The Russian will next meet American 16th seed Sloane Stephens, who saw off Kiki Bertens of the Netherlands 4-6 6-3 6-2.

"This is a meaningful tournament for me," said Sharapova. "This is one of the tournaments I've won a couple of times, and I've also been playing here since I was really young.

"The crowds here are so enthusiastic and give me so much support, so it just feels great to be out on the court here."

Nadal, who has won six titles since making his return after seven months out with a knee injury, took his record for the year to 32 wins and just two losses with victory over Fognini.

The Spaniard takes on Ernests Gulbis in round three after the Latvian beat Serb Viktor Troicki 6-1 6-1.

"Tomorrow I play against an opponent who is very dangerous," said Nadal.

"He's playing well and he's having a great season. I had a tough match against him in Indian Wells this year. He's an aggressive player, big serve, big shots from the baseline, and I have to be playing great if I want to have any chance."

World number 24 Jerzy Janowicz ripped off his shirt after a stunning 6-4 7-6 (7-5) win over Jo-Wilfried Tsonga, the 22-year-old Pole saying afterwards: "I was really happy especially because I didn't get off to a good start to the season and I was sick.

"So this was really important for me."

In the women's doubles, Briton Laura Robson teamed up with Lisa Raymond of the United States to beat Svetlana Kuznetsova and Flavia Pennetta 6-7 (2-7) 6-4 10-7.