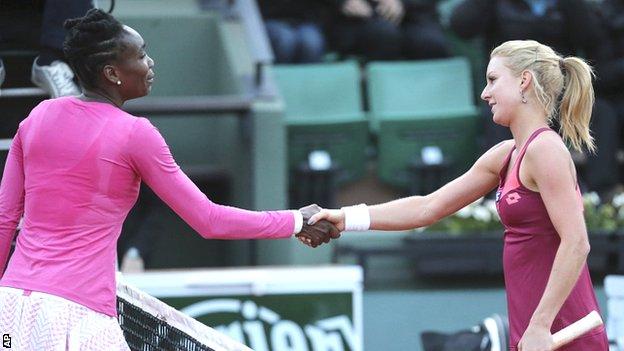 Pole Radwanska, 22, defeated the seven-time Grand Slam champion, 32, in three hours and 20 minutes, despite blowing a 4-0 lead in the second-set tie-break.

She will face German qualifier Dinah Pfizenmaier in the next round.

Venus's sister Serena progressed on the opening day, as did Roger Federer and David Ferrer in the men's tournament.

Asked if this would be her final French Open, Venus said: "If it's the last match, I'll let you know. That's pretty much how it works.

Venus, who is suffering from Sjogren's syndrome - an incurable immune system disease - has now lost in the first round twice in the last four Grand Slams following her early exit at Wimbledon last year.

"With what I've gone through, it's not easy," she added. "But I'm strong and I'm a fighter.

"I don't think I'm just playing for me now. I'm playing for a lot of people who haven't felt well. It's a positive to be able to play three hours."

The 2008 champion survived a second-set blip to secure a deserved victory and book a second-round match against France's Mathilde Johansson or Chanelle Scheepers of South Africa.

"It's always nice to be back here in Paris," said Ivanovic. "I'm just enjoying my game, enjoying competing. I love clay - I grew up on it. It feels like home coming back here."

Last year's runner-up was the first player to reach this year's second round with a 54-minute demolition of her Dutch opponent.

World number 86 Rus has not won a match on the main tour this year and it showed as Errani breezed through to set up a meeting with Kazakhstan's Yulia Putintseva, who beat Japan's Ayumi Morita 6-2 6-3.

Is this the last we see of Hewitt at Roland Garros? If so, he certainly went down fighting.

Milos Raonic sits top of the serving charts with 16 aces in his first-round win over Xavier Malisse, including a fastest of the day at 138mph.

The women's speeds are headed by Serena Williams at 116mph, but she trails Nadia Petrova by four in the ace count. The Russian managed 12 - but still lost to Monica Puig.

The 32-year-old - who turned professional in 1998 and has contested 56 Grand Slams - looked set to upset home favourite Simon by storming into a two-set lead.

But he needed treatment for blisters as Simon managed to square the match and lead 5-0 in the decider. Hewitt clawed back to 5-5 only for Simon to scrape over the line in three hours and 19 minutes.

The Australian's exit, allied to Andy Murray's withdrawal through injury, means there are only three Grand Slam champions left in the men's draw - Federer, Rafael Nadal and Novak Djokovic.

When asked if he would be back in Paris next year, Hewitt said: "I don't know. I haven't even thought about it.

"It's disappointing, but I didn't come here with massive expectations.

"It would have been nice to get the win and then the draw opens up a little bit when you take a seed's spot. That's frustrating."

Ferrer has now advanced past the first round of the French Open every year since 2003. Matosevic, by contrast, has failed to make round two at any of the nine Grand Slams he has contested.

Next up for Ferrer - who reached the last four in 2012 - is fellow Spaniard Albert Montanes or Steve Johnson of the United States.

Williams suffered her first opening-round defeat in Paris since 2001 when she slumped to a 37th-ranked opponent, who is 10 years her junior.

But she went down fighting, coming back from 4-0 down in the second-set tie-break to force a decider where she succumbed on a second match point.

"I am still shaking. It was a real long match and Venus was playing really well," said Radwanska, whose sister Agnieszka was the runner-up to Serena Williams at Wimbledon last year and is seeded four here.

Venus arrived in Paris having played only five tournaments in 2012 as she continues to battle Sjogren's Syndrome and a back injury.

Both players broke serve five times in an opening set that Radwanska edged, and the errors continued in the second.

Williams fought back from 4-0 down in the tie-break to level the match but then suffered a double break at the start of the deciding set and was on the back foot from there.

There were 16 aces and 61 winners for Raonic as he showed glimpses of why some have tipped him to cause a surprise this fortnight.

The 19-year-old Puerto Rican marked her Grand Slam debut by rallying from a set down to stun Petrova in the day's biggest shock.

Puig is one of 15 teenagers in the main draw but showed plenty of composure in beating 30-year-old Petrova, a two-time semi-finalist.

Querrey equalled his best French Open performance merely by winning a match. The highest-ranked American man at 20th, he is through to round two for only the second time in seven visits to Roland Garros.

"I'm a beginner," says Serena Williams of her first attempt at speaking French in public before jokingly switching allegiances from the United States. "I think I am French because I have a flat here. I love Paris."

"I'm really into the food here," Serena says of her downtime in the city. "I didn't know it was so good. I've got to watch that waistline!"

More about Serena's off-court activities: "My friend Val is taking a painting class. I said, 'Wow, that sounds so French, you go to Paris and you paint and you meet someone. That would be really cool.' I ended up going to a class. It was fun. Really random. I'm probably the worst artist alive. So I didn't do so well, but it was really, really, really fun."

Sara Errani opts to block out one of her fondest memories: "Last year was an unbelievable tournament, the best of my life. But I don't want to think about that. I just want to come here and play another tournament."

"I am tired of it all," Piotr Wozniacki explains his decision to stop coaching daughter Caroline. "She's no longer the same Caroline. She has her boyfriend, her name, and knows well if she is satisfied or not."

Virginie Razzano on her first conversation with Serena Williams since upsetting her in the "I saw her in the locker room. It was just her and I at that point. She was washing her hands and said, 'How are you?'. I answered, 'Okay'. She said, 'It's cold today' and I said, 'Yes, not very warm'. She was not laughing very much, I can tell you. For a year when I meet her in the locker room she's not really my friend, but today I started thinking, 'Well, maybe'. I was happy."