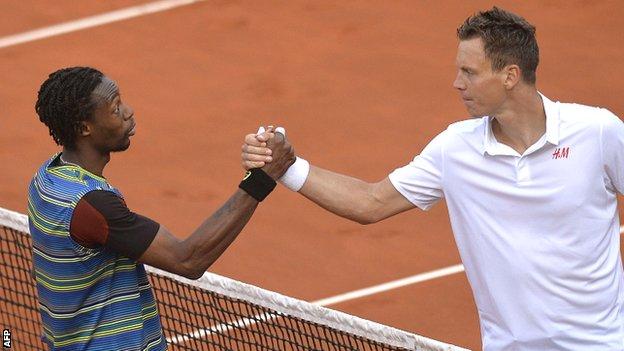 Gael Monfils secured one of the most notable wins of his career with a shock victory over fifth seed Tomas Berdych in round one of the French Open.

Injury problems saw Monfils drop out of the world's top 100 and, now at 81st, he is playing in Paris via a wildcard.

Sergiy Stakhovsky was so incensed by a line-call he received against Richard Gasquet, he dug out his phone and snapped the ball mark in the clay. He plans to show it to the tournament organiser.

Champion in 2011, Li was given a stern test by Anabel Medina Garrigues but showed greater consistency to post her first victory over the Spaniard in four clay-court meetings.

At 4-4 in the second set, Medina Garrigues dropped serve in controversial circumstances - penalised on break point for calling out as she hit the ball - and Li then served out the match.

"It's magical here, it's a place where I feel good, where I manage to transcend myself," said Monfils, who saw off four break points in the decider.

"I worked and I believed in myself. I have gone through very difficult moments, so necessarily, you know, you get tougher."

The 2012 Wimbledon runner-up followed into round two with a 57-minute thrashing of Peer.

Radwanska was playing for the first time since missing last week's Brussels tournament with a right shoulder injury, and was also sporting heavy strapping on her thigh.

"I decided to have a week of rest and just practice," she said. "I think it was a good move.''

No Frenchman has won the Roland Garros singles title since Yannick Noah in 1983 - could Tsonga be the man to end the wait?

The Russian opened her title defence by sending out a warning to her rivals - she hit no double-faults, faced no break points and won 89% of points on her first serve in a 54-minute win.

As the defending champion, Sharapova had been scheduled to open on Court Philippe Chatrier, but her match was moved to Lenglen as Berdych and Monfils went to five sets.

"Obviously getting off the court and seeing the men's match was still playing, I was happy with the decision that everyone made," she said.

"I wanted to finish tonight, so it was a good decision."

Goerges has been suffering from a wrist injury but it was nevertheless a remarkable victory for 30-year-old Kucova, who had never previously won a main-draw match at a Grand Slam.

She does not even have a singles ranking after being off the tour for 18 months, and her last win before this event came in July 2011.

A landmark victory for the 18-year-old Australian on his Grand Slam debut. Kyrgios showed composure beyond his years to edge three tie-breaks and end the hopes of 34-year-old Stepanek, ranked 52nd.

World number 262, Kyrgios entered qualifying via a wildcard but when injury denied compatriot John Millman the chance to accept his wildcard into the main draw, it was passed down to Krygios.

A boisterous band of Monfils fans in front of our box were going absolutely crazy during the final set. They refused to sit down and when Monfils broke for 6-5 the main guy ripped off his coat, threw it in the air and danced around the stands. It was classic early-evening Roland Garros - a jumping stadium with the sun descending - as Monfils, back from injury with a wild card, somehow found some late, late energy and inspiration to knock out the fifth seed Berdych. Monfils is such a character, such an athlete, such a player. It's great for the sport to have him back winning matches like this.

Asked what she knows about second-round opponent Mallory Burdette, Agnieszka Radwanska replied: "To be honest, not much. Nothing at all, actually. I might Google her.''

Radwanska on her and sister Urszula's hair colour: "She was brunette for two weeks, but she didn't like it so she changed to blonde again. We're both blonde now. But I think I go back to dark because everybody's telling me to so I will do it soon, probably."

Bethanie Mattek-Sands on American women winning six of their seven matches on Monday: "It's funny, because a couple of years ago, everyone was asking me: Where is women's tennis?' Here we are now.''

"Sharapova can scream all day and I just go 'no' and I lose a point?" Anabel Medina Garrigues questions why she was penalised at break point in her defeat by Li Na.

Caroline Wozniacki on her golfing efforts at Augusta, where she caddied for boyfriend Rory McIlroy: "I made the biggest divot on the grass and I got quite a few comments after that. For example, 'How much did you have to pay Augusta for the one acre of grass you tore up?'. Andy Roddick tweeted me afterwards going, 'The grass almost went further than your ball'."