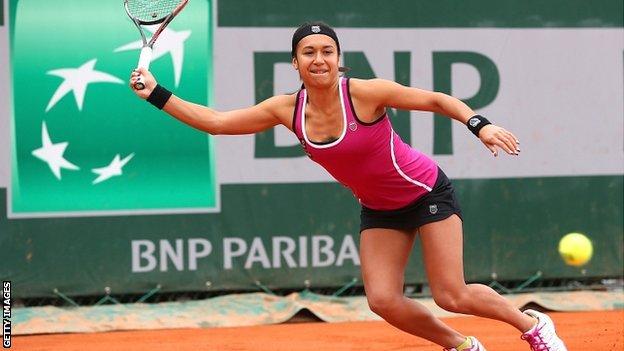 The British number two went down 6-4 2-6 6-4 to Switzerland's world number 56, in a match postponed from Tuesday because of rain.

It leaves Britain without a player in the second round of either singles draw at Roland Garros for the first time since 2007.

However, Watson's defeat was of a very different nature to those of compatriots Laura Robson and Elena Baltacha, who both lost swiftly in straight sets.

"I'm really disappointed," she said. "I thought I had a good draw and a good chance to get through to the next round.

"I knew it was going to be tough, my first match back, but still I'm super disappointed I lost."

Watson, 21, arrived in Paris without a match since April, when she was diagnosed with glandular fever.

She had spent six weeks at home in Guernsey resting, before returning to the practice court in the last few weeks to prepare for Roland Garros.

The poor weather gave Watson an extra 24 hours of recuperation and she finally strode back onto a match court on day four of the tournament.

A fist pump followed the Briton's opening service hold but Voegele, 23, began to take a grip of the match with a break in game five that proved decisive in the first set as the Watson first serve deserted her.

When the Swiss earned two break points at the start of the second set, Watson looked to be heading for a quick exit, but her fighting qualities came to the fore.

Two rasping forehands and an ace helped see off the immediate threat, and sparked a superb set of tennis from the world number 50.

"Despite the result, I think there was a lot to be positive about in Heather's performance - she played some very good, decent tennis.

"She struck the ball really well from the back of the court and served very well with a high first-serve percentage and a lot of aces and some free points. Maybe at times there were some long Voegele service games, bouncing back between deuce and advantage, that she was not able to capitalise on.

"Watson needs some games under her belt, and she needs a favourable draw so that she can just build some momentum in her next event."

Taking some pace off her first serve - she later revealed it was because her elbow was troubling her - and finally able to unload on some returns, Watson powered through four straight games from 2-2 and took the set when the clearly rattled Voegele double-faulted

The momentum was now very much with the Briton but a toilet break from Voegele before the deciding set interrupted proceedings, and on the resumption Watson was broken when a forehand was called wide, to her disbelief.

It was to be the break that gave Voegele victory, but it was nevertheless Watson who dominated the latter stages.

She tore into the Voegele serve at 4-3 down and it was to the Swiss player's credit that she clung on to her advantage, saving three break points as Watson threw everything at her.

The Swiss closed out the match with an impressive service game and Watson looked understandably disconsolate as she left Court Six, but the level of her performance was far higher than could have been expected following her illness.

Asked about the bathroom break taken by Voegele before the final set, Watson said: "Girls do it all the time. It's just the norm.

"Maybe she did need to go, but I should have been focused and ready for whatever."

Watson still plans to play doubles and mixed doubles in Paris, while gradually increasing the intensity of her training before heading back to the UK for the grass-court season.

"I think being in a match situation and playing matches definitely helps," she added.

"Naturally you want it, so you're trying a lot harder, using your muscles a lot more, rather than in practice when you're more relaxed and playing freely.

"So I think after today this has helped me, and it's a shame. I wanted more matches under my belt but I just have to work from here, get in the gym and do stuff to get fit for the grass."