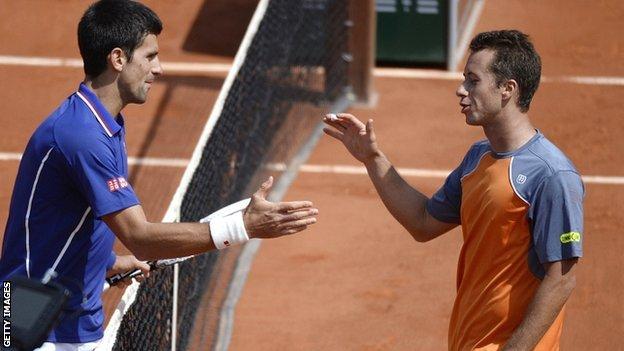 Top seed Novak Djokovic faltered for the first time at this year's French Open before beating Philipp Kohlschreiber to reach the last eight.

He later spoke about how he had coped over the last two days since learning that his childhood coach, Jelena Gencic, had died aged 77 in Serbia on Sunday.

"It hasn't been easy, but this is life," said Djokovic.

"You know, life gives you things, takes away close people in your life, and Jelena was my first coach, like my second mother.

"We were very close throughout my whole life, and she taught me a lot of things that are part of me, part of my character today, and I have the nicest memories of her."

Djokovic will play 12th seed Tommy Haas in the quarter-finals after the German's 6-1 6-1 6-3 demolition of Russia's Mikhail Youzhny.

On the same side of the draw, seven-time champion Rafael Nadal celebrated his 27th birthday with his best performance of the tournament so far as he beat Japan's Kei Nishikori 6-4 6-1 6-3.

"I played much better today than the first three matches, no doubt about that," said the Spaniard.

"If you told me two days ago, 'You will play like this today,' I will say,'Give me the paper and I will sign,' because I'm happy the way I improved my game today."

An unconvincing first hour in particular will have given Djokovic's rivals hope after he had begun the tournament in clinical style.

Kohlschreiber, trying to repeat his 2009 win over Djokovic at Roland Garros, broke first with a fine return game at 2-2 but would pay for not breaking again until it was too late, despite a host of opportunities.

Djokovic was out of sorts, swiping his racquet in disgust at one stage, and saw a late charge to try to rescue the opening set foiled when Kohlschreiber took it with an unplayable net cord.

The turning point came during a second set in which the German converted none of his six chances to break, while Djokovic took his only opportunity in game four.

It was far from vintage stuff from the six-time Grand Slam champion and his serve was continually under threat, but his ability to get out of jail took him all the way to the finish line.

Djokovic again took his only opportunity of the third set and broke twice more in the fourth.

By the time Kohlschreiber finally capitalised on a break point - for only the second time in 13 opportunities - he was already 5-2 down, and Djokovic sealed a scrappy win at the second time of asking.

"Conditions were very difficult to handle both for me and him, but he adjusted better," said Djokovic.

"In the start he was more aggressive. I was still trying to find the rhythm on the court, and the first set was gone.

"Obviously I needed to step it up, and I've done that. You know, all four sets were quite close."