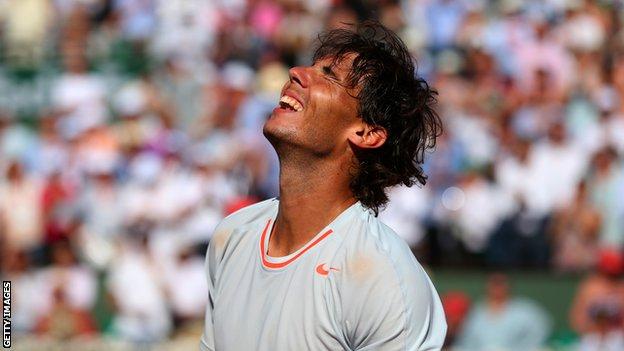 It will be Nadal's first Grand Slam final since he beat Djokovic at Roland Garros last year, having missed seven months with a serious knee injury.

Friday's first semi-final had been the focus of attention ever since the draw paired the duo in the same half, and it did not disappoint.

While not quite matching the five hours and 53 minutes of their 2012 Australian Open final, there was drama every step of the way.

Nadal failed to serve out the match in the fourth set and Djokovic let a 4-2 lead slip in the fifth, before the Spaniard proved the stronger as the decider headed past one hour and 20 minutes.

"It's very, very special for me," said Nadal. "I want to congratulate Novak, he's a great champion and he will win here at Roland Garros one day, I'm sure.

"Serving for the match at 6-5 in the fourth, I was serving against the wind, so I knew it was going to be a difficult game. I was ready for the fight. In Australia 2012 it was a similar match - today it was me [that won]. That's the great thing about sport."

World number one Djokovic said: "It's been an unbelievable match to be part of, but all I can feel now is disappointment. That's it. I congratulate him, because that's why he's a champion.

"That's why he's been ruling Roland Garros for many years, and for me it's another year."

With the temperature pushing 30C, Nadal's fearsome forehand had dominated the early stages, helping him to break at 3-3 and go ahead early in the second.

Djokovic would prove to be at his most dangerous when behind, however, stringing together a brilliant four games to level and letting out an almighty roar after one rasping forehand.

The two tournament favourites landed blow after blow on each other, with Nadal responding superbly to dropping the second set by breaking at the start of the third when a line call went against Djokovic.

Nadal closed it out after a brisk 37 minutes, interrupted only when Djokovic headed off court with the trainer, and the champion twice led by a break in the fourth against the apparently fading top seed.

Djokovic refused to yield, however, recovering to 4-4 before some magnificent returning denied Nadal as he served for a place in the final at 6-5.

With the wind in his sails once again, Djokovic raced through the tie-break, levelling the match with a fizzing forehand that caught out Nadal at the net, and got his first glimpse of a place in the final with another great return at the start of the fifth.

Djokovic, looking for the one Grand Slam title that has so far eluded him, made it to 4-2 before Nadal began to reel him in, levelling in a thrilling game that saw the Serb miss an easy put away by touching the net at deuce.

Both men produced brilliant tennis, and the occasional shocking miss, as the games ticked by and the tension rose, but several missed smashes and complaints to the umpire about the slippery court suggested Djokovic was the edgier.

When the end came, it was swift, as Nadal fired a forehand winner on his way to three match points and Djokovic sent a tired forehand over the baseline.

It might only have been a semi-final, but the Spaniard's reaction showed how thrilled he was to reach his first Slam final after 12 months so disrupted by injury.