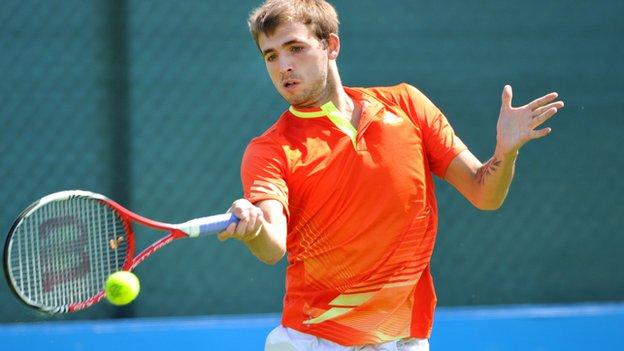 Dan Evans booked a quarter-final place in the Aegon Trophy at Nottingham by beating Brydan Klein in an all-British second-round battle.

The 23-year-old from Solihull earned a 6-2 6-2 win over Klein, who recently switched nationality from Australia.

Before the match Evans heard he had picked up a wildcard entry to the main draw of the Aegon Championships at Queen's Club, which begins on Monday.

Four of the world's top eight players are appearing in that tournament.

Evans told the Lawn Tennis Association (LTA): "I started slowly but got going in the end.

Who is Kyle Edmund?

"I was 2-0 down and it was nice to get off the court with a win against a tough opponent who has been playing well, coming through qualification and playing a lot of matches."

Evans, who is ranked 299th in the world, has high hopes for the Nottingham tournament, which ends on Sunday.

"I put a bit more pressure on myself to win, to get through to the quarter-finals here and to justify that wildcard into Queen's.

World number two Andy Murray also hopes to compete at Queen's after a back injury, along with Tomas Berdych, Jo-Wilfried Tsonga and British teenager Kyle Edmund.

Eighteen-year-old Edmund, from Beverley in East Yorkshire, has been rewarded for his impressive progress with a wildcard at Queen's.

Edmund has already won two titles on the senior Futures Tour, most recently in Florida last month, and is ranked inside the world's top 450.

"If I get to hit with the top guys it would be great," he said.