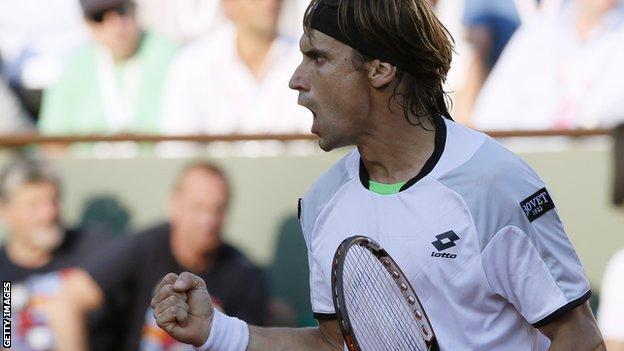 David Ferrer reached his first Grand Slam final and ended hopes of a first French champion in 30 years with victory over Jo-Wilfried Tsonga at Roland Garros.

It ends a run of defeats in his first five Grand Slam semi-finals that only Britain's Tim Henman has exceeded with six.

Ferrer will be a huge underdog against seven-time champion Nadal, but he did a magnificent job of subduing France's number one and his compatriots inside Court Philippe Chatrier.

The atmosphere was unexpectedly low-key as many of the 15,000 spectators took a break following the five-set epic between Nadal and Novak Djokovic.

"It was a bit strange, because there were half of the seats that were empty," Tsonga said afterwards. "This was a bit weird."

He added: "Maybe in a few hours, few days, I will say, 'OK, it was a good tournament; I played well; I was in semis.' But today I'm just disappointed."

If the remaining spectators were hoping for a repeat of the thrilling match they had just seen, they were to be disappointed.

Ferrer reeled off six of the first seven games as a wayward Tsonga, playing in his fifth major semi-final, made error after error.

He fell 4-0 down and went long when he finally earned a break point in game five, the set slipping away in 33 minutes.

A comeback looked on the cards when Tsonga finally strung some winners together, firing one down the line for 2-0 in the second set, but it only heralded another run of mistakes.

Ferrer won four games in succession and, despite being pegged back to 4-4, continued to press, narrowly missing out on taking the set in game seven when Tsonga fought off three break points.

The world number five was not rattled by the missed opportunity, dominating the tie-break to claim a two-set lead that Tsonga never looked like overhauling.

With the Chatrier stadium rapidly emptying, Ferrer got the decisive break at 3-1 in the third and cracked his 24th winner of the day past the Frenchman to seal the biggest win of his 13-year career.

"I'm very, very happy," said Ferrer. "This tournament is very special for me and to be the first final of a Grand Slam in Roland Garros is amazing.

"Now I want to enjoy this moment, to rest tomorrow, and to try my best in the final."