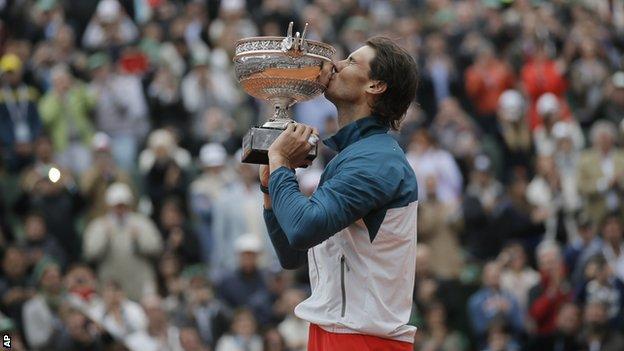 With one of his trademark shots - the back-foot, inside-out forehand, sizzling and spinning with diagonal ferocity - Rafael Nadal claimed another piece of tennis history; the first man to win the same Grand Slam tournament eight times.

His knees letting him down for the first time, the excitement of the moment understandably turning them to jelly, the Spaniard crashed to his back for the customary celebration.

Then, his clay stained shirt hidden by tracksuit top, he lifted the Coupe Des Mousquetaires and took the familiar bite from the handle.

Familiar scenes, remarkably the eighth time we've seen all this at Roland Garros, and eight titles in one place having just turned 27 is incredible.

Defeat by Robin Soderling in 2009 remains the single blemish and bookies have sliced the odds to 8/1 on him remaining undefeated for the rest of his French Open career.

This was all the more remarkable considering it was his first Grand Slam tournament since Wimbledon last summer.

After dramatically losing to Lukas Rosol, on that famous night on Centre Court, Rafa took seven months out to get straight physically, missing the US Open and the Australian Open.

So when he returned at the relatively low-key Vina Del Mar, Chile, in February, and especially when he moved to the hard courts at Indian Wells in March, there was plenty of apprehension.

How would the dodgy knee react to the California concrete? What about the busy sequence of back-to-back clay court tournaments in the spring? And what about at the next Grand Slam when tested by the world number one, over four and a half hours, a break down in the final set?

Nadal says he felt a lot of pain in the knee in that first tournament in February and in Barcelona, in April, said he felt very negative. But things were better here. "The knee is resisting tough matches," he confirmed.

An ongoing recovery process is clearly being taken day by day, week by week. He just happens to be winning tennis matches at a startling rate in the process.

Nadal won't entertain any substantial forward planning. He intends to prepare for Wimbledon and get in the best possible shape for the grass but it will be tricky - he's pulled out of the Halle tournament in Germany - and knows it will be only a second outing away from the clay in 12 months.

"Are there still doubts?" he was asked at his standing-room-only Paris news conference. "Doubts are part of this life," he replied with a smile. "People who don't have doubts are arrogant."

If there is pain, or doubt, then it is being well concealed. The training is as hard as his joints will allow, his desire to improve on the practice court remains and on matchday has competed as fiercely as ever. Possibly more so.

All this has earned him seven titles from nine tournaments and just the two defeats (both in finals) in the four months of his comeback.

Most wins at a Grand Slam

Every victory, every ranking point between now and February will add to his already substantial tally. Even though he stands at five on the new ATP ranking list, it is not out of the question that he could be number one again later in the year.

All the talk here at Roland Garros after the match, as Nadal sat on the news conference desk moving effortlessly from one international interview to the next, was of his eight French Opens.

But let's consider something just as significant: This was a 12th Grand Slam title for the man from Majorca. That's the same as Roy Emerson who held the record outright until 13 years ago.

I remember peering in the gloom on Centre Court in 2000 when Pete Sampras moved onto 13, beating Emerson's record.

The sensation of historical significance on that dark, moving evening, was inescapable. I am sure there were many people that night who assumed the mark would never be beaten.

Sampras ended up with 14 and Roger Federer has 17 but they're the only men who've won more than Nadal.

Like Serena Williams the day before - superbly winning a 16th Grand Slam - his claims to sporting greatness are indisputable.

215 comments
Back to top
unknown