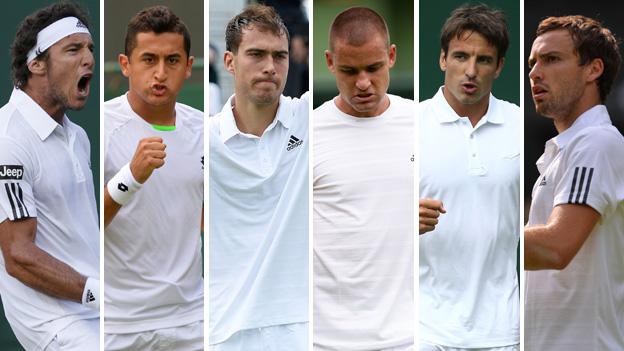 Andy Murray was given a daunting route to the Wimbledon final when Roger Federer and Rafael Nadal came out in his half of the draw.

But those two greats of the game have been knocked out and two other top-10 seeds, Jo-Wilfried Tsonga and Marin Cilic, have withdrawn through injury.

Nicolas Almagro, the 15th seed, replaced them as the highest-seeded player left in 26-year-old Murray's side of the draw, but he was beaten on Friday by Jerzy Janowicz.

However, there remain several tricky opponents for the world number two to conquer if he is to make the final on Sunday week where he is scheduled to meet top seed Novak Djokovic.

Four-time Wimbledon semi-finalist Tim Henman analyses the dangermen still lurking in the bottom half of the draw, starting with Friday's third-round opponent.

Tim Henman's verdict: "He has a really big game and carries huge weapons around the court. And for a guy that is 6ft 8in, he moves incredibly well. He is a real dangerman in the bottom half of the draw because I think he has the 'X-factor' and could cause a lot of problems. What I'd really like to see him do is be ultra-aggressive on the court and go for his shots, then things could get really interesting. He can be a little unpredictable and whether he has the consistency in the Grand Slams over the best of five sets, well, maybe we will find that out very soon."

Tim Henman's verdict: "He had the fortune of playing against an injured Jo-Wilfried Tsonga in the first round. Like Janowicz, he really has some weapons to be fearful of. A big game, big groundstrokes, big serves, a big forehand and a big backhand, but also a big mouth. For me, the real question mark rests on his temperament. He said the top four were boring recently, so you are never quite sure what is going to come out of his mouth or off his racquet. And he has lost all five matches he has played against Murray."