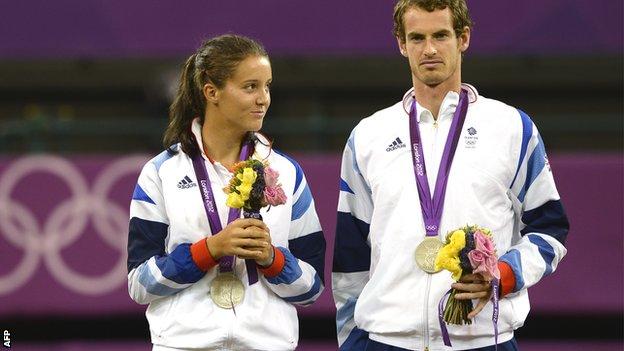 Britain's Andy Murray and Laura Robson will both take to Centre Court on Friday after rain affected the schedule at Wimbledon.

Robson will play Colombia's Mariana Duque-Marino in their second-round match at 13:00 BST, with the weather preventing them from appearing on Court Two on Thursday.

Murray will hope to take another step through an increasingly open draw when he plays Tommy Robredo in the third round at approximately 17:00, after 15th seed Nicolas Almagro takes on 24th seed Jerzy Janowicz.

Playing on Centre Court could prove advantageous, with the weather forecast suggesting the roof might be required at some stage in the day.

Robson, 19, upset 10th seed Maria Kirilenko in the first round, opening up a potential path into the second week of the tournament.

Duque-Marino, 23, is happiest on clay courts but battled through three rounds of qualifying and beat world number 36 Julia Goerges in the main draw on Tuesday.

"She's tough for sure, she's pretty consistent," said Robson. "I think she's got quite a nasty little slice, so it's going to be a tough match."

Second seed Murray, 26, will hope to avoid the fate of Rafael Nadal, and all of whom have made early exits.

Almagro is the highest seed remaining in Murray's half of the draw at 15, but the Scot refuses to look beyond his next match and a place in the last 16.

He faces an experienced campaigner in the 31-year-old Robredo, who has fought his way back up to 29 in the world rankings after slipping as low as 471 last year when he missed five months with a leg injury.

"At his age, it's obviously a good effort to come back from a tough injury, but he's a top player," said Murray.

"He had a good win [in round two] against Nicolas Mahut, who has been playing well on the grass. He's very, very experienced. He's extremely fit. He won three matches in a row at the French Open from two sets to love down. He fights right until the last point.

"When he's not injured, he's been in the top 20 in the world for a number of years. He knows how to win tennis matches, so it's a tough match for me."

This time last year, Robredo was ranked 266 and he has since won the 10th ATP title of his career in Casablanca. He was one of the stories of the French Open when he became only the second man ever to come back from 0-2 down in three consecutive Grand Slam matches.

He has also won two of his four previous matches against Murray, although they were their first two meetings in 2006 and 2007.

"I have nothing to lose," said the Spaniard. "I'm enjoying myself. I'm playing great tennis. It's lovely to be in a Grand Slam playing one of the best players on tour.

He added: "If I have no chance, I don't go into the court, I go home. This way I have one more day of holiday.

"So I'm going to go for it; I'm going to go into the court and try my best. If I have a chance, I will try to get it. If not, then I'll congratulate him, best of luck to him, see you next time."