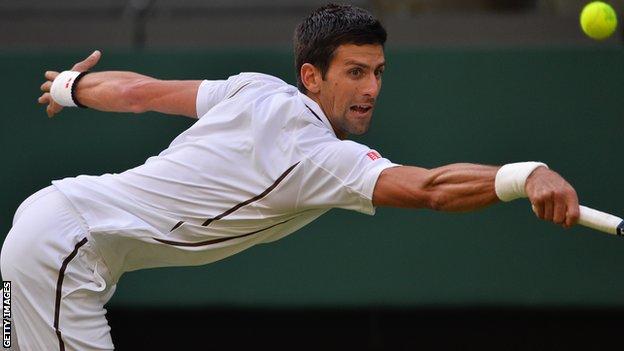 Top seed Novak Djokovic survived some anxious moments before reaching the last eight at Wimbledon with a 6-1 6-4 7-6 (7-4) win over Tommy Haas.

Djokovic needed only 25 minutes to win the first set against his German rival.

Hass, ranked 13th in the world, improved and led 3-2 in the second set after breaking Djokovic's serve.

But he was unable to maintain the momentum as Djokovic recovered to set up a last-eight encounter with Tomas Berdych.

"It was a tough challenge but I played a really really good match," Djokovic told BBC Sport.

"It was never going to be as easy as the first set and I had to work for my games, I was serving well and returning exceptionally good at the vital times.

"I am really glad I managed to close it out in three sets."

On the prospect of meeting Berdych in the next round, Djokovic added: "I lost to him the only time I played him here.

"But I think I am playing really really good tennis at the moment, maybe even better than I was when I won it in 2011."

The 26-year-old Djokovic broke Haas's serve in the first game, but Haas proved an awkward opponent and it required more than two hours' work for the world number one to book his place in the quarter-finals.

"For me this was the match Novak Djokovic could have lost en route to the final. If he plays this well then against Berdych he could go through in straight sets again."

Former Wimbledon finalist Berdych emerged triumphant in a tight encounter which was dominated by serve for the first two sets before seventh seed Berdych asserted his authority.

"I was kind of struggling with his fast routine on serve, I couldn't get a return on it at all," the Czech said after mastering the 20-year-old Australian, who had beaten seeds Sam Querrey and Richard Gasquet on the way to the last 16.

"But after the first two sets I felt much more confident."

Berdych upset Djokovic in the semi-finals three years ago before losing to Rafa Nadal in straight sets in the final.

"It's a nice challenge," Berdych added. "I know how to beat him, let's try for the same."

"It's going to be a special match because it is going to be against Murray here in Wimbledon in the quarter-finals," said 29-year-old Verdasco, who is ranked 54 in the world.

David Ferrer fought back from a set down against Ivan Dodig to secure a quarter-final place for the second successive year.

The 28-year-old Dodig started brightly and edged ahead after securing the first set tie-break 7-3.

But Ferrer fought back strongly and will now face Juan Martin del Potro in the last eight.

Dodig was supported by fellow Croatian and former Wimbledon champion Goran Ivanisevic in the crowd.

But he could not maintain his consistency and his serve, which had been such a weapon in the early stages, faltered to allow Ferrer to turn the screw.

After failing to win a point on the Dodig serve for four successive games in the second set, Ferrer broke three times in the third and twice in the fourth to secure victory.

The last Polish man to make the quarter-finals at a major was Wojtek Fibak, who advanced that far at the last three Grand Slams in 1980.