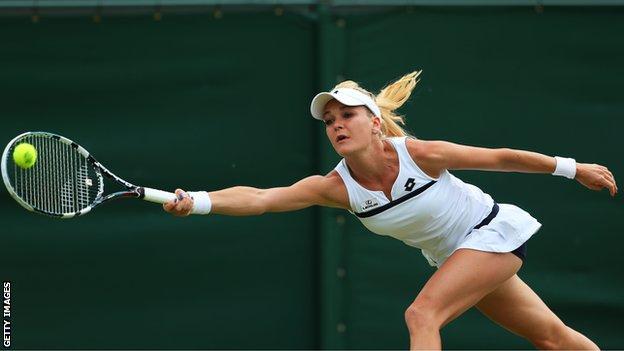 Agnieszka Radwanska secured a Wimbledon quarter-final spot after fighting back to beat Bulgaria's Tsvetana Pironkova 4-6 6-3 6-3 in the fourth round.

Number four seed Radwanska, last year's runner-up, is the highest seed left in the women's singles and will now meet Li Na for a place in the semi-finals.

Britain's Laura Robson, 19, also crashed out with a 7-6 7-5 defeat by Estonia's Kaia Kanepi, who will meet Lisicki in the last eight.

Radwanska, who became the first Pole to reach a Grand Slam singles final in the open era 12 months ago, was excited at the prospect of the all-Polish men's quarter-final between Jerzy Janowicz and Lukasz Kubot.

"This is a huge day for Polish tennis, especially on the men's tour," said Radwanska. "A Polish quarter-final at Wimbledon, it never happened before.

"They have really nothing to lose. That will be a very good match. If I have a chance, I'll watch for sure."

China's former French Open champion Li broke serve six times, the only momentary blip from Li coming when 5-0 ahead in the opening set.

She reached the last four at Wimbledon on her debut in 2006 and matched that run in 2010, but second round defeats in the last two years proved a disappointing return.

"Before I got to the court I was so nervous," said Li.

"I couldn't come to the court totally relaxed. This is the fourth round."

Eighth seed Petra Kvitova, the 2011 champion, booked her place in the quarter-finals with a 7-6 6-3 victory over Spain's Carla Suarez Navarro.

"Everybody is talking about me being the highest seeded player in my half," said the 23-year-old. "That's something it's not really easy to hear."

"Playing a Grand Slam, every occasion is big, every quarter is big, even if you're playing like Timbuktu Court, Aorangi," Stephens said.

"I'll go out and play hard. I'm looking forward to it. I'm excited. Hopefully I'll have a good match and have fun."

Stephens is the last American singles player left at Wimbledon and will now meet Marion Bartoli, the 2007 runner-up.