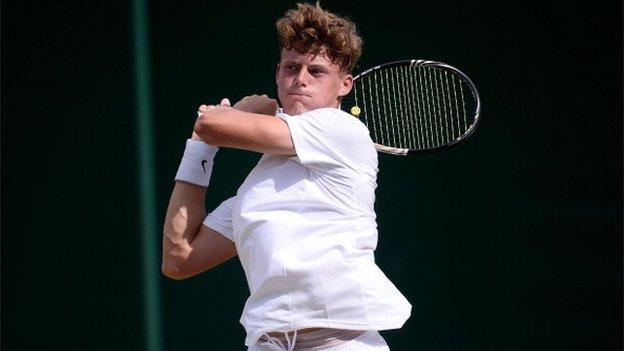 Teenage tennis star Billy Harris has become the Isle of Man's first player to win a singles match at Wimbledon.

He was one of to reach the second round on Monday, with eight losing.

The Manx player will now face the number nine seed Filippo Baldi from Italy on Tuesday.

Speaking after his match, he said it was an "unforgettable experience".

"It is my first Wimbledon so I was nervous going into the first set and had a few double faults, but I settled down a lot in the second and third.

"It has been great to see Andy (Murray) and Laura (Robson) doing so well and to have a big crowd cheering you on makes a massive difference. The atmosphere out there was amazing.

"I get a lot of help from the Isle of Man and it is nice to fly the flag" he added.

Harris was awarded entry into the main draw at Junior Wimbledon this year after competing in the Grade 1 International Tennis Federation (ITF) at Roehampton.

Former coach and multiple island ladies champion, Karen Faragher said: "It is an amazing achievement and I am sure he will inspire all the island's juniors.

"I taught him at the age of four and it was obvious he had the potential - it is fantastic that he is now fulfilling it."

Harris is a member of the island's Albany lawn tennis club but has been training at the Soto Tennis Academy in Sotogrande, Spain.

Club chairman Stuart Colligon said: "This is a fantastic achievement for Billy, he is one of the island's brightest hopes in junior tennis and we wish him the best of luck in the competition."