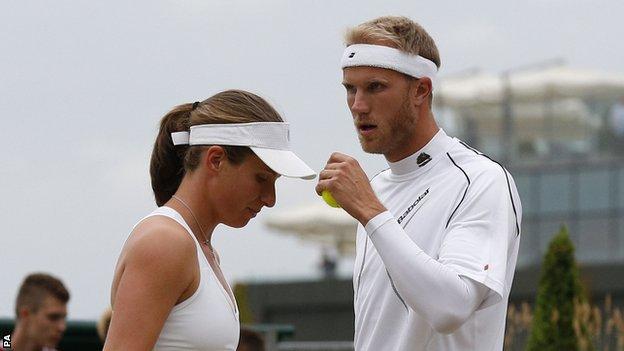 Britain's interest in this year's Wimbledon doubles is over after Dominic Inglot and Johanna Konta went out of the mixed competition in round two.

The home hopefuls were beaten 3-6 6-3 6-4 by Daniel Nestor and Kristina Mladenovic in a late-night encounter which ended at 21:06 BST on Court 18.

With the match poised at a set apiece, Nestor asked for play to be suspended but his request was refused.

And he benefitted from the decision as he and Mladenovic wrapped up victory.

The Britons gained the advantage in the first set when Konta poached two winners at the net to break Mladenovic's serve for a 5-3 lead and Inglot served out the set.

The eighth seeds hit back in the second set by breaking Konta's serve to go 3-1 ahead and that was enough to level the match.

The supervisor was then called after Nestor wanted to stop but she said it was too early for play to be halted.

Inglot faced a break point in the first game of the decider but rescued it with a 125mph ace. He then faced three further break points in the fifth game but saved all of those - two of them with more booming aces - before holding.

However, in the wildcard team's next service game from Konta, four break points were saved before a fifth was claimed by the Canadian/French pairing to put them 4-3 ahead.

The match ended in the gathering gloom as Nestor served out to love.