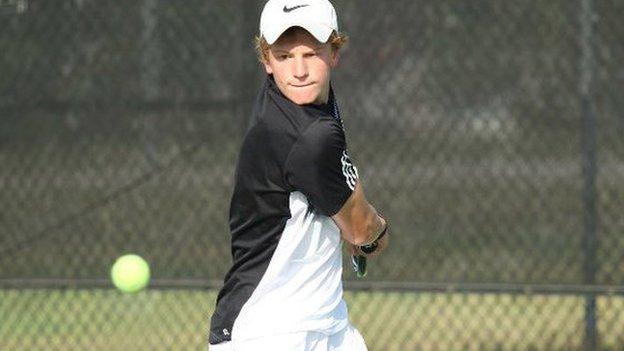 Clayton, who last summer, is set to compete in his first Games as part of a four-man Jersey squad.

The 19-year-old has been given a bye in the first round of the event at the Joell Stadium, Hamilton.

"I really want to do well, not just for myself, but for the island and the team," he told BBC Radio Jersey.

"Being the top seed people fear you, but then it can also put a lot of pressure on you because you're expected to do well.

"I've seen the draw and I know there's some good players out there."

Over the past year, Clayton has gone from competing as one of the top 100 juniors in the world, to the lower tiers of professional tennis.

"This year has been a bit tougher - 2012 was an incredible year for me, I did things that I didn't think I was even going to come near to," he said.

"The standard is considerably higher. I'm doing very well in doubles, but really now I want to focus on getting my singles ranking up."

Jersey have no players in the women's event at the Island Games, but the men's team are the top seeds overall with Guernsey seeded second.

Tennis is one of 16 sports being contested by islands from around the world including Greenland, the Isle of Man and Alderney.

BBC Radio Jersey and BBC Channel Islands News will have coverage from Bermuda. The Island Games run from 13-19 July.