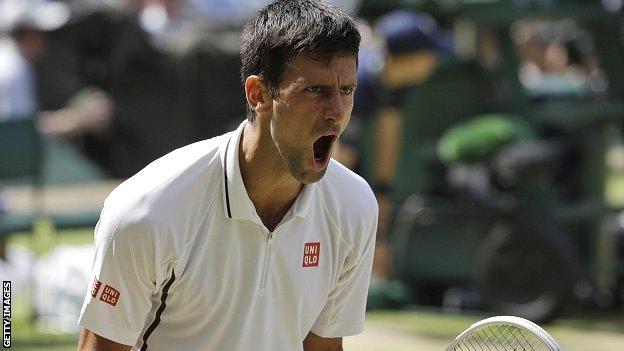 The match was the longest men's semi-final in Wimbledon history.

The previous longest last-four encounter was the 1989 match between Boris Becker and Ivan Lendl, which Becker eventually won.

"It was one of the best matches I've been a part of," said the Serb, who won the 2011 Wimbledon title.

"I could not separate us, apart from when I was 2-1 and a break up - and I dropped serve.

"That's why he's a Grand Slam champion. He came up with some top shots, credit to him."

Djokovic, who was playing in his 13th consecutive Grand Slam semi-final, is bidding for his seventh major title.

Before Friday's match on Centre Court he led Del Potro 8-3 in head-to-head encounters but was beaten by the Argentine in last year's Olympic bronze-medal match, also held at Wimbledon.

Del Potro, who was not even sure if he would be able to play after aggravating a knee injury in his quarter-final, held his own for much of the first set.

However, with the score at 6-5, his 26-year-old opponent found another gear, managing to break the Argentine for the first time in the tournament.

But Del Potro, the 2009 US Open champion, refused to wilt, breaking his rival to love to lead 4-3 in the second set.

Del Potro, 24, staved off a break point in his next service game and went on to level, to the loud approval of the Centre Court crowd.

With the score at 3-3 in the third set, Del Potro had two break points but netted with a volley on the first and narrowly missed with an attempted backhand pass on the second.

As the match wore on the baseline exchanges became ever more punishing and one scrambled forehand by Del Potro had Djokovic smiling wryly in disbelief.

The Serb was smiling again when Del Potro saved the third of three set points with a heaved forehand that skimmed the baseline.

But it was Del Potro who buckled in the tie-break, which Djokovic secured courtesy of a flicked backhand winner from behind the baseline.

The third set alone took 69 minutes but there was no let-up in the fourth, although there were some nice moments of levity to break the tension.

Djokovic broke Del Potro to lead 4-3 in the fourth set only for the Argentine to hit back immediately, securing the break with a backhand winner down the line.

Djokovic reeled off back-to-back return winners to steal a march in the ninth game but Del Potro girded his loins and held.

There were some mind-boggling rallies in the tie-break, including two match points saved by Del Potro.

And it was Del Potro who came through it, pulling out a fearsome backhand return at 7-6 to force a deciding set.

The crowd, already fevered, would have become even more aware they were witnessing a bona fide Wimbledon classic.

At four hours and two minutes the match became the longest men's semi-final in Wimbledon history but there was much more to come.

Play went with serve until 4-3 before Djokovic broke his rival's resolve and gave himself the chance to serve for the match.

Del Potro forced a break point but Djokovic saved and rounded off the win with a threaded backhand down the line.