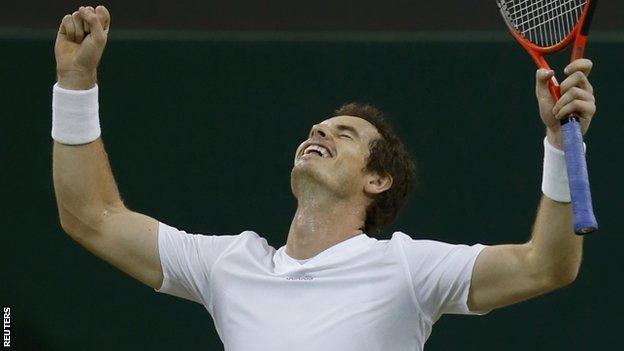 Britain's Andy Murray said he felt happier than a year ago after reaching his second Wimbledon final with a dramatic victory over Jerzy Janowicz.

In 2012 Murray became the first Briton to reach the Wimbledon men's final since Bunny Austin in 1938.

"Last year I think there was a lot of tension in my semi-final, whereas today it wasn't quite the same," said Murray.

"I've got to a position I've been in before. Last year was completely new to me."

Murray, hoping to end Britain's 77-year wait for a men's singles champion, admitted he felt it was "almost expected" that he would reach a second successive final at SW19.

"I think this year has been a little bit different for me because there are a lot of expectations," said the Scot after beating the 6ft 8in Pole under the Centre Court roof.

"Last year when I won my semi I was very emotional and today I was just delighted to come through and get another chance at playing in a Wimbledon final."

The second seed took to the court at 18:19 BST after top seed Djokovic needed nearly five hours to overcome Juan Martin del Potro in what was the longest semi-final in Wimbledon history.

Murray's late start would prove significant a little over two hours later when tournament referee Andrew Jarrett announced the roof would be brought across because of fading light.

The second seed complained about the decision during the match and later described his anger as a "normal" reaction.

"I feel Wimbledon is an outdoor event and you should play it outdoors until it's not possible to do that. It worked out OK for me at the time," he said.

"Once I got back on the court I wasn't angry. It's just frustrating. People get angry for a few minutes and 20 minutes later it's fine, I still have a job to do."

Murray predicted his semi-final opponent would soon be a top 10 player after a testing three-hour contest against the 24th seed and first-time Grand Slam semi-finalist.

"It was a very tough match, completely different to any of the other matches I played so far," said Murray.

"He's a very talented and unpredictable player. He hit some huge serves out there and gave me very little rhythm. I'm glad to get it done."

Janowicz, who before the semi-final had accumulated 94 aces during the Championships, was expected to dominate on serve.

But it was Murray who ended with the better service stats, the Scot rattling through 20 aces compared with Janowicz's nine.

"I didn't play my best tennis. I think this was second worst match during this tournament. I was struggling a little bit with my serve."

When asked about the decision to close the roof, the 22-year-old replied: "I don't care. What I can do? I care about myself. I don't care if he was angry or not."

Murray will play Djokovic at 14:00 BST on Sunday as he seeks to follow Britain's Fred Perry, who won this third and final Wimbledon title in 1936.