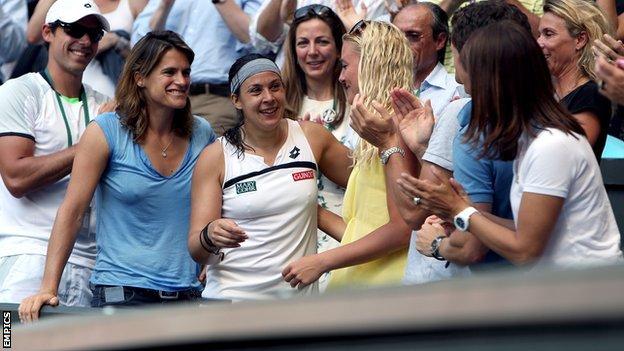 Marion Bartoli has targeted winning more Grand Slams after her victory in the Wimbledon women's final.

The Frenchwoman, 28, beat Sabine Lisicki 6-1 6-4 on Saturday to claim her first major.

"I am ready for the challenge," said Bartoli. "One is pretty good for me. Even if I don't get another one, I will still be very proud of it.

"But I'm going to try my hardest to get more. Now that I have one, I definitely believe I can get more of them."

When tested as a child, Marion Bartoli was told she had an IQ of 175

Bartoli, who had struggled for form coming into Wimbledon, was seeded 15th for the tournament and did not lose a set on her way to the title.

Her next shot at winning a Grand Slam will be the US Open, which runs between 26 August and 9 September.

"It will take me some few days to realise that I am the Wimbledon champion," said Bartoli, who is unconventionally two-handed on both sides.

"Actually when I will come to realise it, I will maybe think about the US Open and getting a shot at winning over there."

Bartoli will pick up £1.6m for winning Wimbledon but said she had not considered what to do with her winnings.

"I don't know what I'll do with the money. A lot of it will go to taxes, but that's fine," she added.