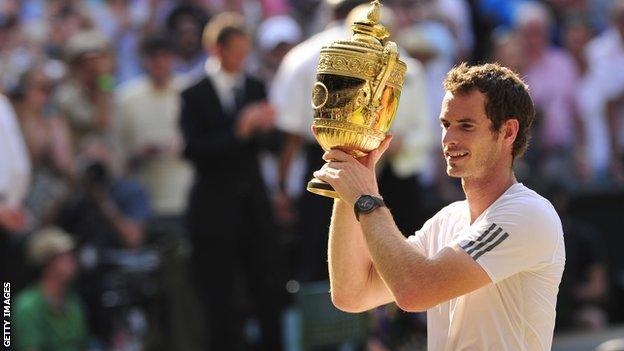 Andy Murray has finally ended the 77-year wait for a British man to win the Wimbledon singles title.

The Scot defeated number one seed Novak Djokovic at the All England Club to become the first Briton to lift the trophy since Fred Perry in 1936.

Here, BBC Sport Scotland looks at the reaction to Murray's success from around Scotland.

Former Scotland footballer Kenny Dalglish: "Unbelievable. What a fantastic story. Magnificent. What fantastic dignity from the loser. Off to celebrate. Ya beauty."

Olympic gold medallist Chris Hoy: "It has been an absolute privilege to have been in the box with crew and family and friends. It was a special moment to share with them and they must have wondered if it was ever going to happen.

"You can see the difference the Olympics win had for him, it gave him the extra confidence. It is an amazing achievement and there is no reason why he can't be a multiple winner of Wimbledon."

Badminton world silver medallist Imogen Bankier: "Actually so happy and proud to be Scottish, Murray is a legend. Hope all the doubters and haters are eating their words!!"

Former Wimbledon mixed doubles champion, and Andy's older brother, Jamie Murray: "What an incredible day!! So proud of my lil bro! What a champion!!"

Scotland's First Minister Alex Salmond: "Many congratulations to Andy Murray on a truly phenomenal victory. Andy's determination to win was visible in every point and he delivered an outstanding result in a real clash of tennis titans.

"His phenomenal performance against the world number one displayed incredible physical prowess and depths of mental fortitude.

"Last year Andy Murray won the hearts of Wimbledon, this year he has won the championship and on today's form there will be many more victories to come."

Scotland's Minister of Sport Shona Robison: "Congratulations Andy Murray on a well deserved win, Scotland is so proud of you!"

Scottish Labour leader Johann Lamont: "Andy Murray has made history. This is one of the greatest achievements ever in Scottish sport.

"This was a triumph of self belief. Andy Murray is an inspiration to us all and what he did today will live with everyone who saw it."

Scottish Conservative leader Ruth Davidson: "Huge congratulations to Andy Murray whose victory has not just made Wimbledon history, but has cemented his place as one of the all-time greats of world tennis.

"It was a fantastic result and a brilliant performance."

Judy Murray: "It's the best feeling ever to see your son win Wimbledon. This is what he has talked about winning since he was a little boy, it was a dream that has become a reality now for him."