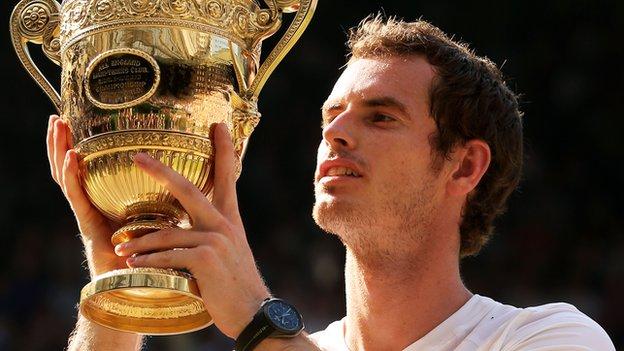 All too often sporting moments and achievements are given a misplaced historical significance. Not on Sunday.

Andy Murray made genuine history on Wimbledon's Centre Court by winning the men's singles in straight sets against Serb Novak Djokovic to become the first British male champion since Fred Perry in 1936.

Comparisons of this nature are always pretty futile, but as achievements go it ranks alongside England's World Cup triumph in 1966, England's Rugby World Cup victory in 2003 and Sir Bradley Wiggins ending Britain's long wait for a winner of the Tour de France.

But in some ways, Murray's achievement surpasses all those. For Wimbledon to host the greatest tennis tournament in the world for so many years without a winner or even a serious challenger has been a serious embarrassment.

Now Wimbledon, tennis and the country have the champion they have craved for so long.

Sunday was a day to celebrate and to reflect on how Scotland's Murray managed to deliver despite the enormous pressure and expectation on his shoulders.

What made his victory all the more remarkable was that he did it in the middle of this golden era for men's tennis. Rafael Nadal and Roger Federer might have been knocked out early here this year, but Djokovic was still there at the end, the world number one refusing to surrender quietly.

But once the celebrations are done, attention will quickly turn to whether Murray's win can be used to inspire a step change for tennis in this country.

Because, while his victory is everything British tennis has been waiting for, it also tells us nothing about the system which is currently in place. Murray, 26, got to the top not because of the Lawn Tennis Association (LTA) and this country's development programmes but in spite of them.

Murray and his parents opted to take him out of the British system, moving him to a tennis academy in Barcelona to develop his game.

As Murray has continued his relentless drive to the top, so British tennis seems to have gone backwards. Murray, and Laura Robson in the women's singles aside, no other British player got past the first round this year.

Murray highlighted the concerns when he said earlier in the tournament: "There's not too much depth right now, that's pretty clear. I would like there to be more players in the top 100, but it's not the case."

The LTA says the signs at junior level are encouraging: Oliver Golding won the US Open boys' title (as Murray did) in 2011 and Kyle Edmund reached the semi-finals of the Wimbledon boys' championships this year. Two years ago, the British juniors also won the Davis Cup.

These are the green shoots which Murray's victory should now help to nurture.

The other challenge for the LTA is to use Murray's victory to widen the sport's appeal and to shake off its elitist image once and for all.

The organisation's record on participation is pretty poor. Since 2008 the number of adults playing tennis once a week has fallen from 487,500 to 424,300.

As a consequence Sport England reduced the LTA's funding from £24.5m to £17.4m for the four years up to 2017. A further £10.3m will be pulled if the LTA fails to show it is making progress on increasing participation.

Again the LTA says the signs are encouraging. This month alone it says 36,000 people - double last year's number - have registered with its Allplay.com website which matches budding tennis players with local courts to play on.

But Roger Draper, the LTA's outgoing chief executive, admits participation has been his biggest disappointment of his seven years in charge.

All of this is not meant to sound negative at such an overwhelmingly positive time. It's simply to make the point that Andy Murray has given tennis an incredible opportunity. The sport must now do its best to grab it.

174 comments
Back to top
unknown