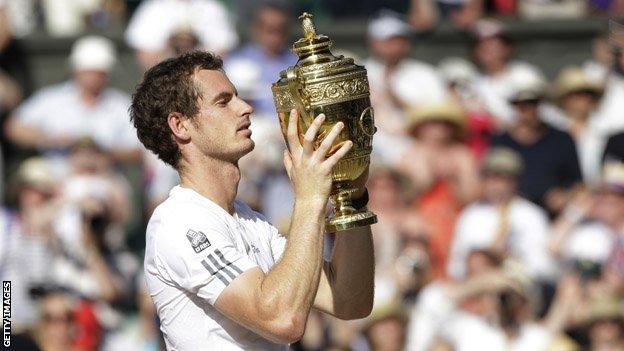 Judy Murray spoke of her pride at being the mother of two Wimbledon champions after son Andy's men's singles victory.

Andy Murray beat Novak Djokovic to become the first Briton to win the title for 77 years, with brother Jamie mixed doubles champion in 2007.

Judy, coach of the British Fed Cup team, told BBC Scotland: "This is everything that he's been working for.

Judy added: "I've a picture in the house of him and Jamie, aged two and three, with their little racquets and Wimbledon T-shirts.

"They're absolutely immersed in their sport, they're tennis geeks, and now they've both got Wimbledon titles."

She also tried to sum up what her son's emotions would be after his stunning straight-sets victory.

"I think he'll be a mixture of disbelief, relief and just total joy that he's achieved the goal that he always set out to do," the 53-year-old said.

Memories of last year's final defeat by Roger Federer meant there was no complacency in the Murray camp, even when he raced into a two-set lead.

"I sat there last year watching Andy when he was a break up and in a good position and not winning in the end," Judy said.

"So, even when he was two sets up and a break up, you can never take anything for granted.

"And, of course, from 2-0 up in the third set, Djokovic won four games in a row and suddenly it was starting to look like a whole different scenario."

But Andy's victory caused his mother an unusual problem.

"I've just been selecting my dress for the champions' ball and I've never worn a long dress in my life before," she said. "But I will be tonight, with great pride."

Judy also thinks her son's win could have more lasting effects on the sport's uptake in his homeland.

"I really hope it can start to change the face of tennis in Scotland and get a lot more people playing and get a whole lot more investment in new facilities."