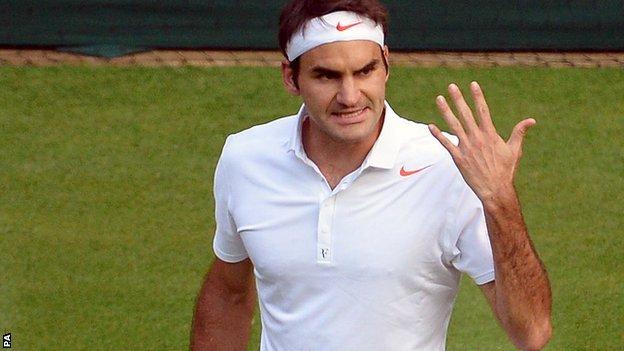 Roger Federer has dropped to number five in the men's world rankings, his lowest position in a decade.

The 31-year-old Swiss fell two places after being knocked out of Wimbledon in the second round by Sergiy Stakhovsky.

Briton Andy Murray, 26, won Wimbledon but stays second, behind number one Novak Djokovic, who was runner-up.

Marion Bartoli, 28, claimed the women's title at the All England Club to move into seventh in the women's rankings, with Britain's Laura Robson up to 27th.

Serena Williams remains world number one despite being beaten by losing finalist Sabine Lisicki in the fourth round at Wimbledon.

British number one Robson also reached the fourth round, which helped move her from 38th to a career-high ranking.

The 19-year-old becomes the first British woman inside the top 30 since Jo Durie in 1987.

British number two Heather Watson, 21, lost in the first round at Wimbledon and dropped 12 places to 68th.

Federer's new ranking is his lowest since he was fifth on 23 June 2003, two weeks before he won Wimbledon for the first of his record 17 Grand Slam victories.

Rafael Nadal, who won the French Open, was a shock first-round casualty at Wimbledon and is fourth in the men's rankings behind fellow Spaniard David Ferrer, who reached the quarter-finals.