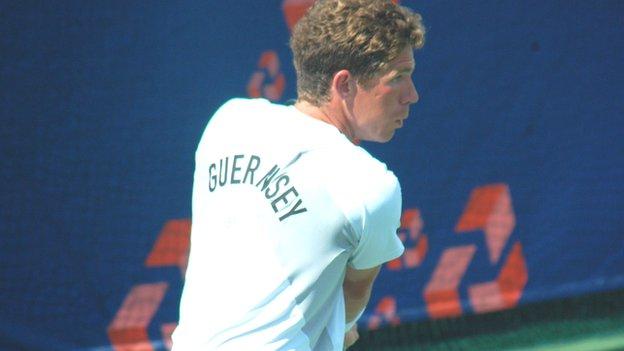 Guernsey celebrated victory over rivals Jersey in the final of the Island Games men's team tennis on a sticky evening.

A tense opening rubber between Scott Clayton and Guernsey's Pat Ogier went to a Championship tie-break.

Clayton let a match point slip by before Ogier took the initiative and held his nerve to win 11-9.

Jersey's hopes then rested on James Connelly in the second rubber but Dom McLuskey's powerful serve helped him to a 6-1 6-3 win and clinched the gold.

"I think that's the most punishing conditions I've played in," said Ogier.

"I threw up a ball at one point and saw two hands in front of me, had to choose one of them, and luckily chose the right ball.

"We don't play as many matches as these guys but we love being at the Games."

Jersey certainly were not helped by a schedule which saw them still playing their semi-final against the hosts at quarter to midnight the previous day.

But tournament officials did delay the showdown with Guernsey from the morning until the afternoon to allow them more time to recover. Tournament rules say there has to be a break of at least 12 hours.

"We played two very difficult matches yesterday against the Isle of Man and Bermuda and we came through both of those on the doubles," Clayton told BBC Radio Jersey.

"I think in those kind of circumstances we've done a good job.

"In my match today I didn't play how I would've liked but I'm not going to take anything away from Pat, he played a good match.

"Well done to Guernsey, it's great for Channel Island tennis we've had Jersey and Guernsey in the final."

The Jersey duo of Stephen Le Cornu and Scott Weaver did manage to win the consolation doubles against Nico and Pieter Robinson, but by then it was too little too late for the bigger of the two Channel Islands.

Despite the defeat Jersey rocketed up the overall medals table on Monday with six golds, mainly in the swimming, putting them joint second along with Guernsey and Gotland and behind Bermuda.

The Island Games features sports such as golf, badminton and beach volleyball and continues until Friday.