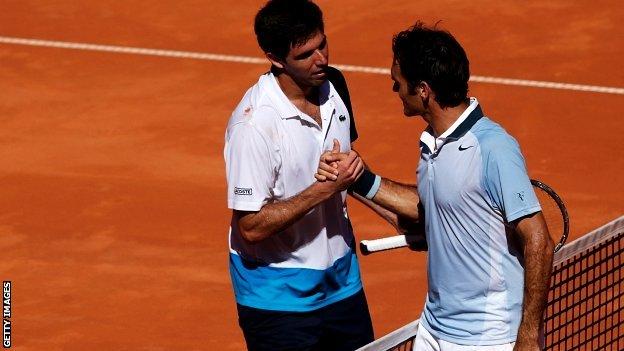 Top seed Roger Federer lost to Argentine qualifier Federico Delbonis in the semi-finals of the German Tennis Championships in Hamburg.

Federer, 31, had been trying out a larger, more powerful racquet frame in Hamburg after last month.

Roger Federer used a 98 square-inch frame in Hamburg, after playing with a 90-square inch frame for over a decade.

"I've been very close on numerous occasions to changing racquets in a bigger way," he said at the start of the week. "But then very often, time was the issue. Maybe also just the records of Grand Slams - I was always keeping on playing quarters and semis - so then it was also a bit more difficult to change it because of the time.

"This time around, all of a sudden I just had the extra 10 days, two weeks I was looking for, and I really was very serious about it. After I lost at Wimbledon, I thought this is a good time to go and test the racquets, to take a bit of time off and then add some tournaments and see was there enough time to change or not."

"I don't think it had much to do with the racquet today," said the Swiss.

"I tried everything I could at this tournament. It's been a difficult week throughout. But I'm happy I fought through many matches. It gives me the matches I was looking for.

"I was clearly hoping, after winning a tough one yesterday, to somehow get through today and then give myself an opportunity to win the title tomorrow.

"It's disappointing, but defeats like that happen sometimes. Unfortunately, I couldn't make it to the final, but nevertheless, I did have four good matches and these are the kind of matches I need."

The world number five will play at the Swiss Open in Gstaad next week.

Federer had taken a wild card for Hamburg and Gstaad as he looks to find some form, and try out the new racquet, after losing in the quarter-finals of the French Open and round two at Wimbledon.

The Swiss will then head to the American hard courts ahead of the US Open, which begins on 26 August.

Delbonis, who goes on to face Italian Fabio Fognini in the final, said: "I feel like I'm dreaming. My key was to enjoy the match and enjoy playing this kind of player, because he's the best of all time."

The 22-year-old Argentine left-hander will be playing in his first ATP final on Sunday after coming through two rounds of qualifying and five matches in the main draw.