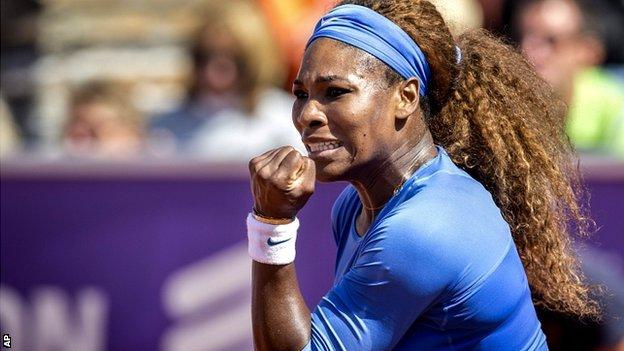 The American dropped serve twice in the first set but overcame those setbacks to win 6-4 6-1 in Bastad.

She had been a strong favourite to win her 17th Grand Slam title at Wimbledon earlier this month, but lost to Sabine Lisicki in the last 16.

"It was really good to come here and win after a disappointing Wimbledon, so hopefully this confidence will help me for the rest of the year,'' said the top seed.

Williams chose to return on clay at the relatively low-key Swedish event, and victory brought her a first ever title at an 'international' level tournament, the fourth tier below Grand Slams.

The second seed was Romanian Simona Halep, ranked 30th in the world, so it was no surprise that Williams won all five matches without dropping a set.

She did not have it all her own way in the final, however, struggling in the early stages and letting out a huge scream when she finally slammed a forehand winner at 3-1 down.

Larsson, the Swedish number one and world number 76, had her chances but could not convert as she struggled to make enough first serves.

Williams eventually found her range and from 4-3 down lost just two more games on her way to capturing the 53rd WTA title of her career.

She remains unbeaten on clay this season, having also won in Rome, Madrid and Charleston.

In Hamburg, Argentine qualifier Federico Delbonis could not follow up with another victory, as Fabio Fognini won the German Tennis Championships final 4-6 7-6 (10-8) 6-2.