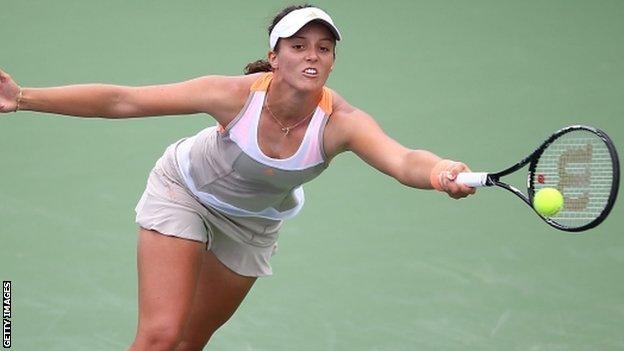 Laura Robson's progress at the Southern California Open came to an abrupt end when she suffered a 6-1 6-2 third-round defeat by third seed Petra Kvitova.

The British number one, landed only 41% of her first serves in the opening set.

Robson found her rhythm in the second but could not keep up as Kvitova broke twice late on to win in 75 minutes.

Robson, 19, will continue her US Open build-up at Toronto's Rogers Cup.

However, she looked short of the quality needed to bridge the gap to the very top of the game as her serve misfired badly in the opening set.

Robson swapped breaks with the Czech at the start of the second, but was soon overwhelmed by her fellow left-hander to complete a disappointing follow-up to her victory over

Kvitova said: "I didn't know exactly what to expect from myself because the first match after preparing for the US hard courts is always difficult, plus I lost to her at the Australian Open.

"But this is tennis, and every day is different, and that's how I approached the match. I played well and my serve was great today. We practised very hard on my serve back home after Wimbledon."

World number three Victoria Azarenka played for the first time since withdrawing from Wimbledon with a knee injury, and the Belarusian eased past Francesca Schiavone 6-2 6-3.

"Just going on the court and competing was so much joy for me," said Azarenka. "I missed playing and I was just happy to be able to do something I've been training for."