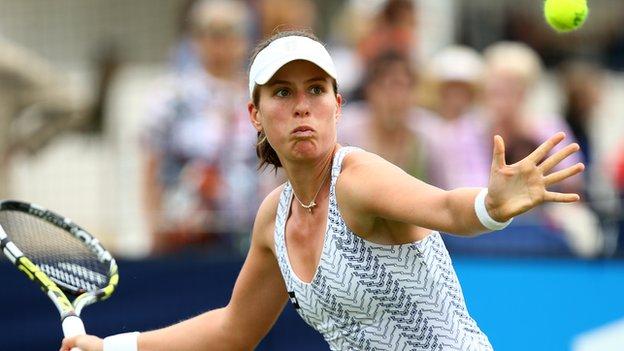 British number three players Dan Evans and Johanna Konta are through to the singles finals at the Vancouver Open.

Rain delays at the second-tier Pro Circuit event meant the quarter-finals and semi-finals had to be played back-to-back on Saturday.

Both will face Canadian opposition in Sunday's finals, with Evans up against Vasek Pospisil and Konta facing Sharon Fichman.

Konta, the world number 147, is on a run of nine matches unbeaten after winning the title in Winnipeg last week, but the bigger Vancouver tournament would represent her best victory should she win on Sunday.

The same goes for Evans, who is currently ranked 248 but will be close to breaking into the world's top 200 for the first time next week.

His progress on Saturday was closely followed online by Wimbledon champion Andy Murray, who is in Montreal preparing for the Rogers Cup.