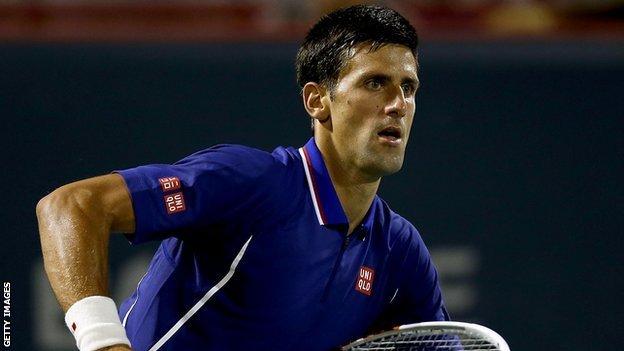 Novak Djokovic is through to the third round of the Rogers Cup in Montreal after a 6-2 6-1 win over Florian Mayer.

In his first match since losing the Wimbledon final to Andy Murray last month, the world number one Serb beat his German opponent in only 55 minutes.

Mayer, ranked 50 in the world, double-faulted to lose the opening set, and could find no way back in the second.

World number one Novak Djokovic won the Rogers Cup in 2007, 2011 and 2012. Having received a bye in the first round of this year's tournament, the Serb's win over Mayer is his 11th successive victory in Canada.

"After a month off I didn't know what to expect. I was extra careful against a tough opponent," Djokovic said.

"I'm keeping my mind-set of step by step, one match at a time. I needed extra commitment from the start and everything went well on court."

Djokovic, who is aiming to win a third consecutive Rogers Cup title, hopes the Canadian tournament will prove good preparation for the US Open, which starts at Flushing Meadows in New York on 26 August.

Nadal, who lost in the first round of Wimbledon to Belgium's Steve Darcis, is playing the doubles event to build up his match fitness after almost two months away from competitive tennis.