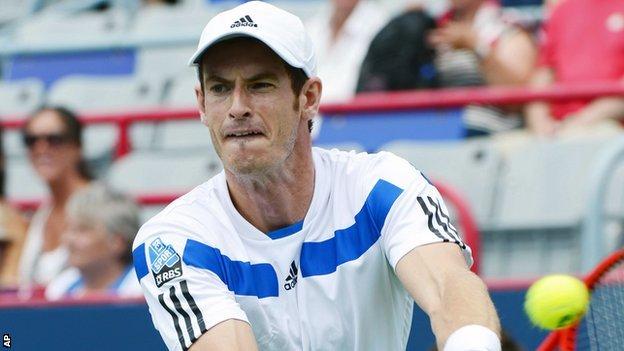 Britain's Andy Murray made a winning return to action by beating Marcel Granollers 6-4 7-6 (7-2) in the second round of the Rogers Cup in Montreal.

Murray, 26, broke Granollers's serve twice in the first set to lead 4-1 before a run of unforced errors saw his rival fight back to 5-4.

But the Scot served out the set and came from 4-1 down to force a second-set tie-break which he won comfortably.

The world number two was playing his first match since winning Wimbledon.

Beating Granollers extended his run of victories to 13, his last defeat coming when he pulled out of a match against the same opponent at the Rome Masters in May, with the back injury that forced him to miss the French Open.

Murray, who will face world number 38 Ernests Gulbis next, showed flashes of the form that saw him become the first British man to win Wimbledon in 77 years, but there were more unforced errors than he would like, something he blamed on the conditions.

"It was tricky. It is extremely windy here and the balls here are quick so it felt like it was flying around," he told Sky Sports.

After Murray took the first set, the 27-year-old Spaniard, victorious on clay in Kitzbuhel last week and a 6-4 6-4 winner over Grigor Dimitrov in the first round here, raced ahead in the second.

But the Briton broke back with Granollers serving at 5-3. He kept his nerve to hold his own serve and, after falling 2-0 behind in the tie-break, won seven successive points to progress.

"I didn't feel that I had my timing and got pushed behind the baseline. He had a very good win over Dimitrov yesterday, won last week and is one of the best doubles players in the world, so he is tough," Murray said.

The US Open champion was given a first-round bye in Montreal along with the rest of the top eight seeds, with world number one Novak Djokovic beating Florian Mayer 6-2 6-1 in his opening match.

Murray also progressed in the doubles with Colin Fleming as they beat Julien Benneteau and Nenad Zimonjic in three sets.

Rafael Nadal made a winning return to singles action as he beat wildcard Jesse Levine 6-2 6-0 in just 72 minutes.

The Spaniard, 27 - playing for the first time since his shock defeat by Steve Darcis in the first round of Wimbledon - saved three break points and broke Levine five times.

"After seven weeks without playing tennis, you start a tournament on hard court, that is tougher for the body," Nadal said.

"You always feel a few things at the beginning. But hopefully those things will not limit my chances to play well."

Argentine Juan Martin Del Potro came from 4-1 down in the deciding set to beat Croatia's Ivan Dodig 6-4 4-6 7-5 - in a delayed match that did not finish until after midnight.