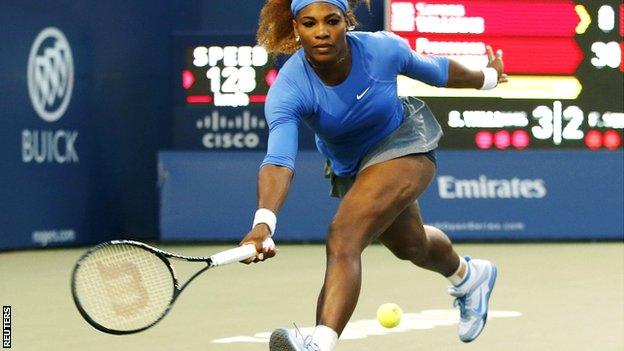 World number one Serena Williams advanced to the third round of the Rogers Cup in Toronto with a 6-3 6-2 win over Italian Francesca Schiavone.

The 31-year-old, who won last month's Swedish Open on clay, took eight games in succession on the hard court.

I made a few errors, but it's just my match on hard in a really long time

Williams, beaten by Sabine Lisicki in the fourth round at Wimbledon, overcame world number 57 Schiavone, 33, for the fifth time in seven meetings.

"I felt solid," Williams said. "Obviously I made a few errors, but it's my first match on hard in a really long time. I also played a really good player, so it was a good match."

Bartoli was scheduled to compete in her first tournament since her at the Southern California Open last week, but pulled out with a hamstring injury.

"My hamstring is getting better and better," said the 28-year-old Frenchwoman, who beat Lisicki in the Wimbledon final last month to claim her first Grand Slam title.

"I just need to take care of it every day. I was able to work with my physio back home and do some rehabilitation and strength work on it so it gets stronger."

Australian Samantha Stosur, runner-up in the Rogers Cup two years ago and the winner of last week's event in Carlsbad, saw off Spain's Carla Suarez Navarro 1-6 6-2 6-3.

Former world number one Ana Ivanovic,winner of this tournament in 2006, beat Anastasia Pavlyuchenkova 6-1 6-4.