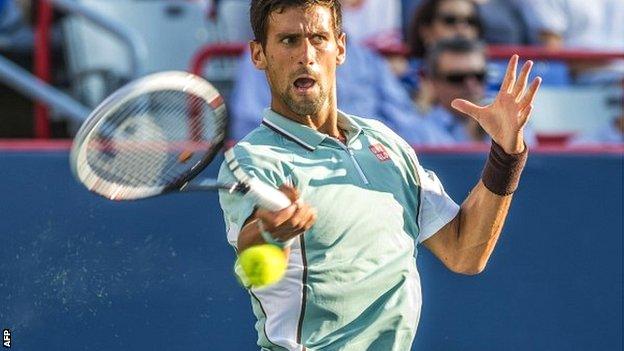 World number one Novak Djokovic secured a semi-final with Rafael Nadal at the Rogers Cup in Montreal with a 6-1 6-2 victory over Frenchman Richard Gasquet.

Djokovic required only 52 minutes to eliminate the world number nine and called his performance "as close to perfection as you can be really".

Canadians Vasek Pospisil and Milos Raonic meet in the other semi-final.

Nadal beat Djokovic 9-7 in the fifth set of an epic French Open semi-final lasting more than four-and-a-half hours in Paris two months ago.

Their last 11 meetings have been in finals, four of which were on hard courts similar to those in Montreal, and they were all won by Djokovic.

"It means a lot, not just to us, but to Canadian tennis. It's an opportunity, a great, great moment."

"Hard court is my most preferred surface. I feel that that's maybe the place where I have more chances against him than on clay definitely," said the Serb, 26.

Fourth seed Nadal admitted the hard courts would make Djokovic favourite to go through to the final.

"The conditions here are probably more favourable for him," said the 27-year-old Spaniard.

"Yes, we are playing on hard, but especially the conditions here. It's one of the fastest courts of the hard-court tournaments outdoors."

Meanwhile Raonic, the world number 13, kept his composure in front of a parochial home crowd as he overcame Andy Murray's conqueror Ernests Gulbis 7-6 4-6 6-4 in a two-and-a-half hour contest.

He now plays the 71st-ranked Pospisil, guaranteeing a Canadian finalist for the first time since Mike Belkin in 1969.

"It means a lot, not just to us, but to Canadian tennis," said Raonic. "It's an opportunity, a great, great moment. At the same time, it's another tennis match. That doesn't change."

Pospisil, who beat American John Isner and fifth seed Tomas Berdych this week in three sets, was given a rather lighter workout in the quarter-finals when opponent Nikolay Davydenko retired because of illness while trailing 3-0 in the first set.

"Two Canadians in the semi-final, one guaranteed to be in the final. It's a historic moment for tennis in Canada," said Pospisil.

"We know each other very well. Since we were little kids."