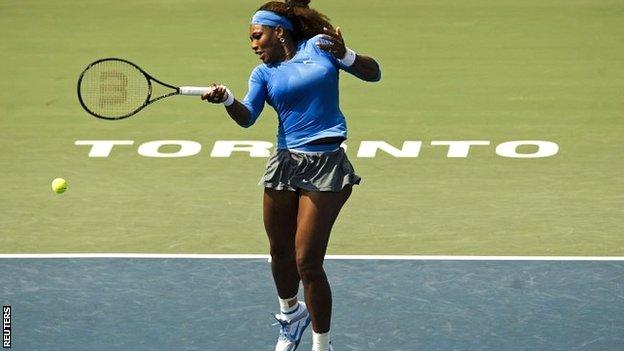 World number one Serena Williams brushed aside Magdalena Rybarikova 6-1 6-1 in an hour to reach the semi-finals of the Rogers Cup in Toronto.

The 31-year-old, seeking her eighth title of the year, will play third seed Agnieszka Radwanska, who beat Sara Errani of Italy 7-6 (7-1) 7-5.

Defending champion Petra Kvitova is out after losing 4-6 7-5 6-2 to unseeded Romanian Sorana Cirstea.

"She's having a much better year. It's going to be an interesting match. It's definitely not going to be easy."

"I'm definitely feeling pretty good, playing much better than I have in the past month," said Williams, who has won all eight of her matches since losing to Sabine Lisicki in the fourth round at Wimbledon last month.

Radwanska's encounter with world number six Errani, who beat her 6-4 7-6 (8-6) in the French Open quarter-finals, contained 11 successive breaks of serve in the first set and lasted a minute more than two hours.

"I was trying to focus really hard in the last few points because I knew it could really turn around for her," said the Pole, beaten by Lisicki in the semi-finals at Wimbledon. "I was looking at the clock and saw two hours already and I said 'I have to end this now'."

The 24-year-old has lost all five of her previous meetings with Williams, most recently on a hard court in Miami in March.

"She does everything so well," Williams said of Radwanska. "She's having a much better year. It's going to be an interesting match. It's definitely not going to be easy."

"I didn't find energy from my legs," said the 23-year-old left-hander, who served 10 double faults.

World number 27 Cirstea, who has beaten former world number ones Jelena Jankovic and Caroline Wozniacki this week, said of her victory: "It might come as a surprise for many people. It's not really a surprise for me, because I know how hard I have been working for the past couple of weeks. It's nice to see the reward."

China's Li, in her first tournament since reaching the quarter-finals at Wimbledon, admitted she was weary after a three-set win over former world number one Ana Ivanovic on Thursday and needed 96 minutes to see off unseeded Slovakian Cibulkova.