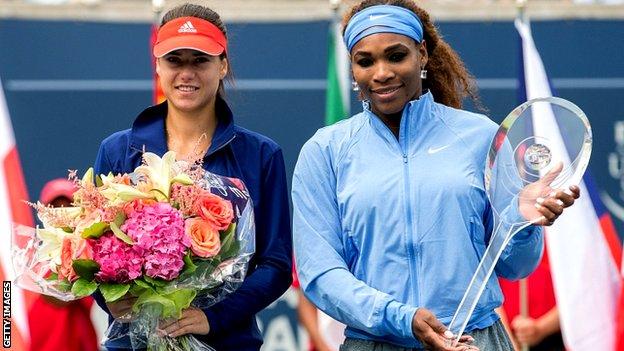 World number one Serena Williams thrashed Romania's Sorana Cirstea to win her eighth title of the year at the Rogers Cup in Toronto.

The American, 31, won 6-2 6-0 in one hour and five minutes to take the Canadian title for the third time.

She will try to win her 17th Grand Slam title at the US Open later this month.

After dropping the first three games there was a brief resurgence from Cirstea following a pep talk from coach Darren Cahill, but it did not last.

The 23-year-old, ranked 27th, cut the deficit with back-to-back games but she would not win another as Williams reeled off nine in a row to seal victory.

Williams, who heads to Cincinnati next week, won her 16th major title at the French Open in June but admitted she had hoped for more as she has been in such dominant form.