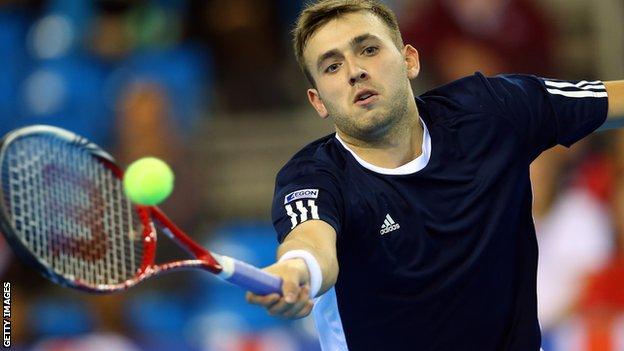 Birmingham-based Evans, 23, moved up to a career best of 169th in the world rankings, six places above James Ward.

Evans lost 3-6 7-6 (7-5) 6-4 to American Bradley Klahn in Aptos, California on Sunday, having finished runner-up in Vancouver the week before.

He is likely to vie with Ward for the second singles spot when Britain travel to Croatia in the Davis Cup next month.

Scotland's Colin Fleming is also at a career-high ranking in doubles after reaching his first Masters 1000 final in Montreal with Andy Murray, and he climbs six places to 22nd in the world.

There was not such good news for women's number two Heather Watson, who lost 6-4 6-7 (4-7) 6-3 to New Zealander Marina Erakovic in the final round of qualifying for this week's Cincinnati Open.

Watson, who beat Francesca Schiavone in the opening round, led 3-1 in the final set but could not convert and she slips one place in the rankings to 80th in the world.

Laura Robson remains British number one at 31st in the rankings but will miss Cincinnati as she recovers from a wrist injury, and she plans to play in New Haven next week ahead of the US Open.