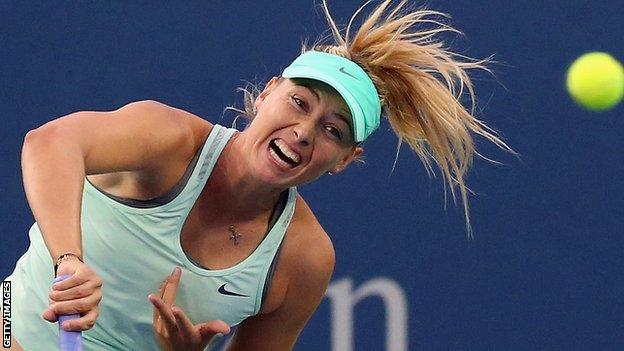 World number three Maria Sharapova made 62 unforced errors as she lost her first match since hiring Jimmy Connors as her coach.

The 26-year-old was making her return to tennis seven weeks after her last match, a shock early Wimbledon defeat.

Connors tweeted: "Every good round starts with a bogey - not the start we wanted, so back to work tomorrow."

American Connors topped the world rankings from July 1974 to August 1977 during a career that saw him win five US Open titles, Wimbledon twice and the Australian Open.

He coached compatriot Andy Roddick for two years until the pair split in 2008.

Sharapova parted with coach Thomas Hogstedt after losing to world number 131 Michelle Larcher de Brito in the second round at Wimbledon.

A hip injury has kept the four-time Grand Slam champion off court since that defeat.

She enjoyed a first-round bye in Cincinnati but struggled to find any rhythm as she lost to world number 15 Stephens.

"I started the match off pretty well, but when you put yourself in a really good position you can't let it go. That's what I did tonight," she said.

"I didn't continue what I was doing well for the first set and a half, and that hurt me.

"I stopped being patient. I started making a lot more errors, especially off the first ball. Just errors that I shouldn't make."